Pardes Summer Program students Annabelle Jaffe, almost 91, and Jacqueline Cohen, almost 19, are decades apart in age and live in different parts of the globe. But they both brought to Pardes lifelong involvement with their local Jewish communities and will leave Pardes with renewed commitments to Jewish life in their hometowns. 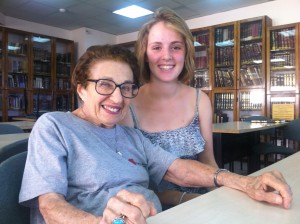 Annabelle Jaffe is the oldest student in the 2012 Summer Program. She was born in Cincinnati, Ohio, and her Orthodox family sent her younger brother to yeshiva, but “girls didn’t necessarily get a Hebrew education,” in those days, she said. Her formal Jewish education began at 11 when she was invited to visit a friend’s Talmud Torah class at a Conservative synagogue. “I fell in love with it,” she recalled during a recent interview in the Pardes Beit Midrash. The class met after school five days a week, and by high school Jaffe was studying Talmud and Mishna. The United States entry into World War II ended her plans to travel to Israel (then British Mandate Palestine) for a year of study after high school.

She enrolled at the University of Cincinnati, studied Pirkei Avot (Ethics of the Fathers) with her grandfather and taught in the Hebrew school at her shul. She also met and married a young Army Air Corps biochemical engineer, Louis Jaffe. Annabelle finished her bachelor’s degree in education, and taught high school history and English. When her principal suggested she consider becoming a counselor, she earned a master’s degree in counseling at George Washington University. July 1, Jaffe officially retired from 50 years as a counselor in the Montgomery County, Maryland, school system. Alongside her public school career, she taught Hebrew and Judaic Studies in local Hebrew Schools.

Jacqueline Cohen may be younger than Annabelle, but she also has been continuously involved with her local Jewish community. Jacqui, as she prefers to be called, is the youngest student in the Summer Program. She was born in South Africa, but grew up in Adelaide, Australia. Her Modern Orthodox parents, Mark and Justine, are leaders in the Adelaide Jewish community and at their synagogue, the Adelaide Hebrew Congregation. Jacqui attended Jewish primary school, but the small Adelaide Jewish community of about 1,000 can’t support a Jewish high school. Jacqui felt that lack left some gaps in her Jewish knowledge, and came to Pardes because she wanted to continue and improve her Jewish education in a supportive setting where she wouldn’t be made to feel out of her depth.

Both women are halfway through the Pardes Summer Program, and they both say it is challenging and rewarding in the way that only Torah study can be. Annabelle is taking an introductory Talmud class, “Better to Die than to Sin?” with Jennie Rosenfeld and “The Law and Philosophy of Maimonides,” with Rabbi Reuven Grodner as well as “Judaism and Conflict Resolution Studies,” with Rabbi Daniel Roth. When Jaffe goes back to the U.S., she isn’t going to let retirement get in the way of working. She plans to be a substitute counselor in the school system as well as a substitute Hebrew teacher at her shul, Ohr Kodesh in Chevy Chase, Maryland. And she is already making plans for next summer. “I think I’ll come back [to Pardes] next year,” she said. “This program is good for the young and the old… I’ve learned so many new things.”

Jacqui is spending her gap year in Israel, in a program for training youth movement leaders. The program includes studying Hebrew and Zionism, visiting Poland, and two months on a kibbutz. For the program’s options period, she chose to study at Pardes. “Pardes is welcoming and open,” she said. She’s also in Rosenfeld’s introductory Talmud class, and studying “Women and Judaism” with Nechama Goldman-Barash, “Jewish Leadership Dilemmas,” with Marc Rosenberg and “Judaism and Human Rights in Israel and Beyond,” with Rabbi Gideon Sylvester. She especially appreciates the openness to questioning and the self-motivated approach to study. “One of the things I love is looking at a piece of Talmud – that moment when I finally understand the Mishna and Gemara – I find that fantastic.”

She will return to Adelaide to be a leader of JAZY – The Jewish Adelaide Zionist Youth, created to include all Jewish young people in Adelaide’s community, from secular to Orthodox. Jacqui will combine her JAZY leadership with studies in commerce at university, but she hopes to transfer to Melbourne where she can also study Jewish education. Pardes has given her new styles of learning and teaching, she says. She wants to introduce havruta-style learning to JAZY, and also looks forward to using her Pardes-enhanced teaching skills. Now, “I have something I’ve learned and can teach … not just something I’ve looked up on the Internet.”