Last weekend I went to Bethlehem with some friends from school. There were many tourists there, as to be expected. But it was a gorgeous day, so nothing could really be bad.

We went into the Church of the Nativity and the line to see the spot where Jesus was born was three/four hours long. Well, if you know me, I don’t do lines. So I went up to the front of the chapel and went around a barricade. I thought I was being really sneaky, but then I realized the back of my scarf had caught the top of the  metal pole and it fell over with a loud crashing noise! I was going to be caught, so I had to think fast, two Arab men, who were there to rip tourists off, ran up to me yelling, you have to go back! you have to go back! I said, no, I am here to pray and continued forward, then one of the grabbed my arm, as if to pull me back in the opposite direction, and I yelled (in the church) DON’T TOUCH ME!!!!!!!! Well, this really scared them and he immediately let me go. I sat in the front row and admired the details of the church. Then, the other Arab man came up to me and said, “You said you wanted to pray?” and since I couldn’t back down now, I said yes. He motioned for me to follow him and I quickly realized he was taking me down the exit into where the 3 hour line was waiting to go, down to the spot where Jesus was born. So I went, happily, to see what was there. Took my pictures, said a little prayer for my friends and family who are Christian and came out.  I was expecting to see the man there with his hand out for a tip, but he wasn’t. I think I had scared them even out of that. 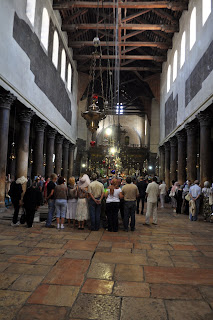 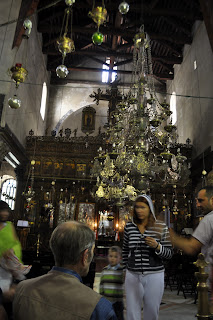 The metal pole I knocked over, and the man in the grey shirt on the right is who grabbed me. 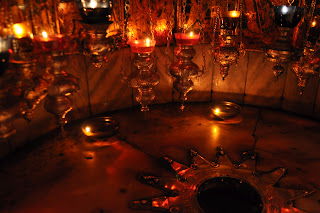 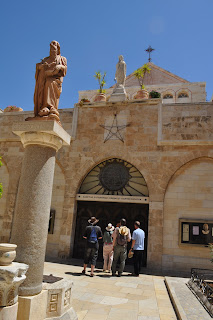