Walking Away From Sinai

When you read the Torah, it’s impossible to miss the drama of the beginning of the revelation at Sinai. But it’s easy to read right past the end without even realizing what’s just happened. In Bamidbar 10:10, G-d is simply giving another mitzvah to the Jewish people. Then suddenly, in Bamidbar 10:11, without any explanation or preface, the cloud is lifted from the mishkan and Am Yisrael begins walking away from Sinai into the promised land.

In Sefer D’varim, Moshe gives a little more closure to this narrative. He quotes G-d as telling Am Yisrael “רב לכם שבת בהר הזה”: You have stayed long enough at this mountain. It’s time to move on and go into the land.

So begins a 34-chapter speech summarizing the Torah, all said while Am Yisrael stands at the edge of the land waiting to go in. Apparently it’s not so easy to move on, even for Moshe.

But then, how could it be easy? How could it even be possible for a human being to experience revelation from G-d, and then to walk away? If one can imagine Am Yisrael walking away from Sinai at all, one must imagine them walking away backwards, like daveners at the Kotel who cannot bring themselves to turn away from the revelatory memories of those now-silent stones.

Fortunately, in lieu of the revelation itself, we at least still have Shavuot and the tikkun leil. It’s my absolute favorite Jewish tradition and my favorite night of the year. It’s our way of returning to Sinai, even all these years later. So it’s a little bit like a midnight release party, which everyone is still really excited about, even though the book already came out some 3000 years ago. You can even come to the party dressed up as your favorite character, as long as your favorite character is Har Sinai covered in flowers.

This year’s tikkun leil at Pardes was generously sponsored by Della Worms in memory of her husband Fred Simon Worms OBE, whose lifelong contributions to Jewish education have helped so many Jews relive Sinai. This Shavuot, the building filled to bursting with Jews of every background coming to hear Torah, a few of them even standing in the back to find room. It was impossible not to feel the energy of ma’amad Har Sinai.

It was, without exaggeration, one of the happiest and most fulfilling nights of my life. But it was also bittersweet. As I come to the end of my Pardes studies, I find myself in the unenviable position of walking away from Sinai.

Rabbi Leon Morris spoke beautifully during the tikkun leil on the idea of becoming a human Torah. Torah, he argued, is not meant to be merely heard or passively received, but embodied and lived. He recounted a midrash which imagined Joseph’s bones being carried in an aron, or coffin, alongside the aron habrit. Because these bones had embodied Torah, they were worthy to be carried alongside it.

Am Yisrael was not meant merely to receive Torah at Sinai with their minds, but to live it wherever we go with our bones. Shochen ad marom, we say at Shacharit—G-d dwells forever in the heights. But at some point, human beings need to come back down to earth. So we had to leave the heavenly world of Sinai, and so many of us at Pardes must leave the beit midrash to find ways to live in this world.

But that doesn’t mean the experience is completely over. While the intensity of Sinai was over, the experience of revelation still followed Am Yisrael after Sinai itself was finished. My Chumash teacher, Alex Israel, taught us that the Ramban sees the mikdash as a kind of portable Sinai. It is a site for Moshe to continue receiving revelation through the midbar. The aron habrit, then, is not only a repository for the memory of revelation, but a place for its active continuation. At his shiur, Leon spoke about the prohibition of removing the handles on the aron habrit as an affirmation that the Torah is meant to always be in motion with us. Like the aron habrit that was carried alongside the aron for Joseph’s bones, revelation comes along with us in the bodies that fulfill its teaching. Even when we came back down to earth, the Torah—lo bashamayim hi—came down with us.

In reality, then, you can’t walk away from Sinai. It walks with you. More than that: it is a part of the very body that is walking away. Whether through a literal circumcision or through the writing of the Shema on our hearts, the Torah is sealed in the flesh of every Jew.

In the early hours of the morning, I stepped aside from the formal shiurim and studied Megillat Rut with my dear friend and chavruta, Eliana Chavkin. While part of me was sad to miss what I’m sure was a brilliant last set of shiurim, my teachers this year have all worked so hard to not only tell me what was in the Torah, but to teach me to read it for myself. I wanted to spend a little of this night really seeing the letters with my eyes, hearing them with my ears and feeling them in my throat. I wanted to practice studying Torah in a way I will be able to take with me, even though my teachers are thousands of miles away. And so I spent the last few hours of the night in the same way that I spend so many hours at Pardes: with a BDB, a cup of coffee, and a couple of Tanakhim, simply working on translating a text with a friend.

And then, like the cloud unexpectedly lifting from the mishkan, the tikkun leil was suddenly over. I wasn’t ready to move on yet, but it was time to go.

At the end of the tikkun leil, you can feel the moment at which endings meet new beginnings. The quiet blue-black night fades into a bright pale dawn. The birds begin singing their psalm for the new day. And that night, all down the Rakevet, the hollyhocks and jacaranda trees blossomed as if to welcome Matan Torah all over again, their ephemeral petals living out the truth of a Torah that is older than the world.

And with the thoughts from the tikkun leil still in my heart, I knew that my lot is better than Ruth’s. Because even though I may feel like I am walking away, the truth is that, wherever I go, the Torah will go. Wherever I lodge, it will lodge within me. Its people is my people, and its G-d my G-d. And when I die, I can only hope to leave behind bones that have fulfilled it.

Tikun Leil Shavuot 5778, In memory of Fred Simon Worms OBE, a longtime benefactor of Pardes and a visionary in Jewish education 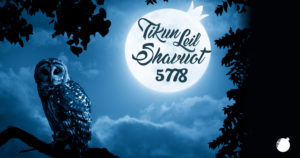