Posted on December 2, 2010 by Avi Strausberg 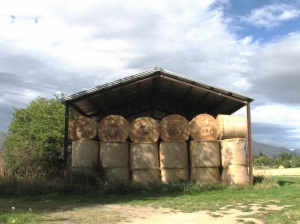 this week’s parsha, מקץ, finds not only egypt, but the whole world suffering from a severe scarcity of food.  joseph, after prophetically interpreting pharoah’s dreams of the forecoming famine, is put in charge of storing food in preparation for the ominous seven years ahead.  many dualities are contained in this parsha.  in pharoah’s first dream, he dreams of seven ears of corn, “scorched by the east wind,” that gobble up seven ears of “solid and full” corn.  and in a second dream, seven ill-shaped, skinny cows eat up seven full-bodies, complete cows.  through these dreams, we see a dichotomy between robustess and ill-being, between abundance and scarcity, between wholeness and want.

the tension between the wholeness and the want that we see foreshadowed in pharoah’s dreams and realized during the years of the famine can be similarly seen in joseph’s own life.  in last week’s parsha, joseph’s father yaakov, makes him that famous coat of many colors.  and his brothers, before throwing him presumably naked in an empty pit, strip him of his coat.  thankfully for joseph, pharoah, after entrusting joseph with the charge of all egypt, again clothes him, this time in a fine linen coat.  and then again, when joseph’s brothers come to egypt begging for food rations, joseph repeatedly accuses them saying, מרגלים אתם לראות את–ערות הארץ באתם, “spies you are, you have come to see the land in its nakedness!” (mikkez, 42: 9).   what’s going on with all of this putting on and stripping off of fine clothing? and why does joseph, somewhat crazily, insist that his brothers have come to see the land in its nakedness?

joseph manages to find great favor and success both at home with his father and in egypt thanks to God by his side.  he is donned with robes of splender and carries himself with the power of his position.  you might even call him a happy, full-formed cow.  but, i’m not sure that this success and even God’s presence is enough to make him whole.  he names his first child מנשה, whose name is rooted in the word “to forget,” saying, “God has made me forget completely my hardship and parental home” (mikketz, 41: 51).  but, he hasn’t forgotten really.  he is still hurting, he is still vulnerable, and he still is exposed, like the corn to the east wind, stripped naked at the hands of his brothers and sent off to make it in this world alone.

underneath the clothes
a naked, lonely hebrew
hungry for family

may we be better through our vulnerabilties, at once able to protect ourselves yet open our hearts to the world,