Love and a Pigeon

As much as I loved A Pigeon and a Boy, by Meir Shalev, from which the above quotation is taken, I have to disagree with the last sentence. The first nine characteristics are, indeed, important for all human beings – but so is the tenth. Simply substitute the word “friend” for “pigeon” and the tenth characteristic becomes a directive for how to be the best friend everyone wishes they had. Not sure what a “friendgram” is? Simple. Tell your friends you love them. And make it obvious.

In A Pigeon and a Boy, the young find it easy to express their emotions, but the old do not. A youthful pigeon handler and a Girl send pigeongrams to each other as often as they can when separated by the circumstance of the 1948 War of Independence: “Yes I love you, yes I miss you, yes I know and remember that you do, too…No I do not want anyone other than you and no I do not manage to sleep at night” (Shalev 192). When they are together, they are equally blunt. During the boy’s surprise visit to the pigeon loft on his way to combat, the Girl asks angrily, “So, you’ve come to say good-bye?”
“I’ve come to see you and touch you and talk to you,” the young pigeon handler responds. “And also to say good-bye. We had an hour, but because you’re arguing with me, we only have fifty-two minutes left” (207). The honesty of their words leads to a relationship in which they reach the highest potential of love: she knows he loves her, he knows she loves him, and each one’s love fills the other with a reason to live.

In contrast, the adults in the story find it hard to express their personal truths. When an Israeli tour guide and a building contractor romantically inaugurate the new rooms in their freshly-built house, the contractor rolls on her side, giggles and says,
“‘You love me.'”
“‘So?'” the tour guide roughly responds.
‘”You love me, I can feel it,'” she replies (270). Neither man nor woman confesses an “I love you”; instead, they must infer from the other’s riddles that the game is worth playing. The game takes many hours; they lose precious time.
In another instance, a sick man, close to death, reveals that he has demonstrated a similar restraint in the past. The doctor asks him, “‘What seems to be the problem?'” and the man replies, “‘In 1964, my wife, Raya, left me and my heart was stricken'” (224). Only now, at the end of his life, can he report the hurt of his wife’s departure. He could not tell her of his heart when it was stricken, nor could he count on her to pull him back into life.

Shalev seems to be telling us that true words are a risk worth taking. Tell her now. Tell him yesterday. Send a pigeongram that is short and clear. Yes, you risk the wholeness of your heart. But without those short, clear words, you also risk stifling your heart’s potential to expand and fly. 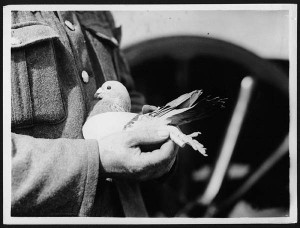 A Pigeon and a Boy, by Meir Shalev, was published in 2006 in Hebrew. In 2007, an English translation was released, allowing the English-speaking world to fall into the embrace of a beautiful novel of love, war and home. Shalev describes Israel with effortless accuracy: a specific sandwich shop in Tel Aviv; a certain neighborhood in Jerusalem; a bird-watching tour in the Golan Heights. In addition, anyone well-versed in the Bible will find allusions tucked within Shalev’s lyrical prose. God finds his way into the story, as do Adam, Eve, Abraham, Isaac, and of course, a dove looking for a home. Read this book; drink in the words. I will read it again and we will make a toast.