Nature, Red in Tooth and Claw

During a Shabbat picnic in the Tayelet, the group of Pardesniks I was with was approached by the most evil-looking tomcat I have ever seen in my life.  Of all the feral cats I’ve encountered on the streets of Jerusalem, none approached this one for pure badness.  This was the Leroy Brown of cats.

Fortunately for you, Dear Reader, it was Shabbat, so I wasn’t able to take a photo of the horrible creature, but if you picture a feline verion of Hollywood character actress Anne Ramsey (of Goonies fame), you will begin to get a sense of what the thing looked like. 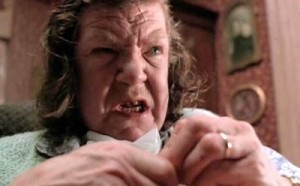 The infernal beast squinted at us for a while, meowling.  When we refused to offer him any food from our holy Shabbat picnic blanket, he proceeded to sit and glower at us with a look that seemed to say “I could kill you in 15 seconds if I chose to.”  I was genuinely frightened.

At one point, the monster got into a stand-off with a five-year-old child from another group of picnickers who had been foolish enough to approach it.  The cat was crouched as if about to pounce, and I have no doubt that he could have taken the kid down if it had come to it.  The little beastie was finally frightened off when another child ran to the defence of the first.  Later, we saw the brute scale a vertical stone wall, offering further proof of its unnatural powers.

I know that feeding the stray cats only makes the problem worse, but I wish we had made an exception in this case and bought the bully’s good will with a little bit of food.  I live a good mile or two from the Tayelet up four flights of stairs, but after the way that child-hunting, wall-scaling monster looked at me, I’m planning to lock all my windows and doors tonight.  And I wouldn’t even dream of venturing back to the Tayelet without a sachet of catnip on hand with which to propitiate the unholy villain.