I had intended to post daily from Poland, but the schedule left me exhausted; I didn’t sleep for more than five hours at any time… late nights and early mornings (particularly for those who woke up to daven Shacharit)… trekking through the bone chilling cold and snow of Poland… travelling back and forth by bus between centuries old Jewish cemeteries and synagogues and Nazi concentration and death camps… absorbing information, emotion, history, culture… it was an intensive five days.

I have impressions that I’d like to share from each day of my trip, but I’ve been left with some feelings that I’d first like to journal.

This trip to Poland was my first visit to Eastern Europe, and as a Russian speaker, I enjoyed picking out the Polish words around me that sounded similar to their Russian equivalents; I took photographs of shop signs throughout the trip. 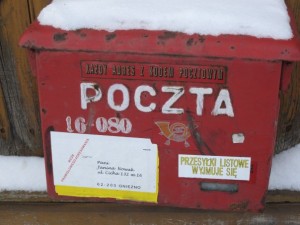 Also, the Polish guards who accompanied us on our trip happened to speak Russian, and I chatted with them about various subjects. Poland felt… close to the homes of my ancestors.

And yet… I had no family members who died in Polish concentration camps; my family’s stories mostly took place in the Soviet Union. My father’s parents both served in the Soviet army; his mother returned home after the war to find her village in Ukraine destroyed, and her family killed. My mother’s father was caught taking potatoes from a harvested field, and was conscripted into the Soviet army as cannon fodder.

I’m not sure how similar the Jewish culture lost to us in Poland was to the Jewish culture of my family. I wish I had sense of the nuances… how did my grandfather’s grandfather practice Judaism? Are my roots in Chassidism or in its intellectual opponents? I know I had rabbis on both sides of my family, but I have no sense of their traditions. I follow the rabbinic laws of Ashkenazi (Eastern European) Jewry, but my religious thinking and practice are very much a reflection of twenty-first century Jewish culture in the (Northeastern) USA.

And yet, I wish I knew more of who my people were – I wish I could somehow discover and be a part of my family’s traditions. I often feel very lonely in my Jewish identity, despite feeling very connected to Jewry and Judaism.