Posted on February 8, 2010 by David Bogomolny I’ve been busy recently, but that’s not the only reason it’s been taking me so long to write this post.

Last week I had a conversation with a chevruta (study partner) on the subject of how we perceive & relate to the presence of G-d (it was a class assignment). We discussed a difficulty that we share in expressing our thoughts on G-d — the inherent limitations of language. The two of us feel that words somehow trivialize our experiences of the Divine — that we can’t translate something so complicated & nuanced into language, which comes filtered through the human mind.

I’m finding that writing about some of my trip to Poland is like this. I’m having difficulty describing some of my experiences in words.

My father asked me how visiting Shoah sites in Poland was different for me than visiting a Shoah museum in the USA or in Israel. It was a question that I’d already asked myself, and it is a question that I have difficulty answering — in words. On one (superficial) level, it was no different than visiting a Shoah memorial; on another level, it was… something I can’t seem to find the language for. The memorial at the Belzec Death Camp serves an important function, preserving the memories of those who perished there at the hands of the Nazis… The camp isn’t large because it was never intended for anything other than murder (it was 1 of only 6 Nazi extermination camps); it was a machine designed for death, and it successfully served its function and was dismantled. We have only one survivor’s testimony of the horrors at Belzec; that’s why we so rarely hear of it (unlike Auschwitz, for example).

[Ground Zero is now a memorial of a terrible event that took place at its site. People from around the world come to see it… and New Yorkers can visit it whenever they like — some pass it regularly on their ways home and to work.]

Before WWII, there were more than 3.5 million Jews in Poland; today the Polish Jewish community is comprised of ~4,000 who are aware of their Jewish identities. No Jews pass Belzec on their ways home and to work. I feel… Jews need to visit. I feel… Jews should honor their own. I feel… this matters. 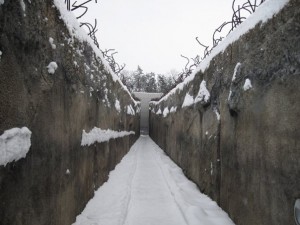 Belzec is not a museum (Auschwitz is a museum); it is a memorial (with a small museum attached to it).

Mass graves lie throughout Belzec, but nobody is quite sure where their boundaries are. The Poles drew a grid over the camp and drilled at the corner of every square to determine where the mass graves might be. If their drills hit human remains at any point, they would mark the surrounding four squares as part of a mass grave. One can well imagine that some human remains were missed with this method, and one may well be bothered by the defilement of a drill striking human (JEWISH) bones lying below the surface of the earth. Rabbi Avi Weiss saw the memorial being developed at this site, and he saw bones poking through earth, revealed by the digging and construction. Rabbi Levi Cooper refuses to enter into the memorial (which I describe below). Some experiences, he says, are not worth the cost.

I chose to enter the memorial. There was only the slightest moment of doubt in my mind at this choice. I wanted to see the memorial that stands at Belzec today. Belzec is sloped, and the center of the memorial has been dug into the hill — a horizontal path through the earth, lined by uneven concrete walls topped with twisted iron bars that rise above the visitor as xe walks between them towards two opposite marble walls; one of which lists the first names of Jews who died at Belzec (I found the name ‘Dawid’), the other of which bears a quote: “EARTH, DO NOT COVER MY BLOOD; LET THERE BE NO RESTING PLACE FOR MY OUTCRY!” (Job 16:18).

The site of Belzec around this path and central memorial has been entirely covered with large artificial rocks resembling ash, preventing new plant growth.

There are other aspects to the memorial, but these are the ones I remember most clearly.

I feel… it matters. 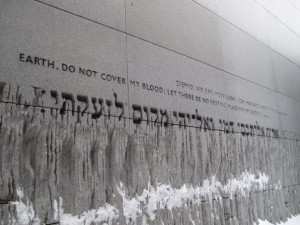