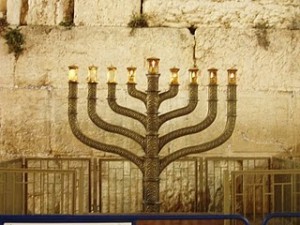 Throughout the ongoing week of Hannukah, we insert into each recitation of the Amidah a special passage that references and recalls the festival which we are currently celebrating. We commonly think of Hannukah as a holiday about a simple jug of oil that miraculously lasted for eight times longer than expected. We grew up with stories about the joy of the light increasing each night, the miracle growing with each passing day, and the like.

However, if you look closely there is a significant tension between the oil story which receives only a few lines in the Talmud (Shabbat 21b), and the military victory that preceded. The gemara only delves into Hannukah while in the middle of discussing which materials are suitable for lighting one’s home on Shabbat. The Rambam, in his Mishne Torah, Hilkhot Megila v’Channukah Chapter 3 Hilkhot 1 and 2 writes about the military victory. In chapter 4 he discusses the appropriate procedures for lighting candles. The litugical insertion is primarily about a military victory, as are the Psalms of Hallel which are also recited throughout Hannukah. Why are we so concerned about the eight days, why would the holiday not be seven days like Passover? According to the Book of Maccabees in the Apocrypha, Hannukah was originally compensation for the missed Sukkot offerings of that year. Finally, the rededication of the Temple and establishment of a Jewish monarchy which would last for nearly 200 years cannot be ignored.

I do not want to diminish the importance of the story of the oil. I also do not want to discourage the ideas that the light of Hannukah are kindled during the part of the year when daylight was scarce, and therefore it brings light into our lives. There are plenty of similar stories that are told surrounding the holiday, and my intention is not to stifle them either. Rather, I want to point out a real tension in the halakhic literature and liturgy that must be seriously considered even as we enjoy the national celebration of Hannukah. My Hannukah blessing is that we should all be able to critically analyze t’fillot, that they should grow in meaning and depth for all of us.