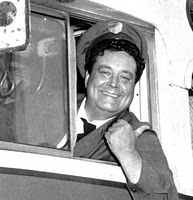 For the past 7 years, I’ve lived in the little town of State College, Pennsylvania. One of the primary modes of transportation around the Penn State campus is the CATA bus system. If you’re not familiar with it, allow me to paint a picture:

The bus makes two loops around campus: the white and the blue. As long as you’re on the right side of the street, it’s impossible to get on the wrong bus. The bus drivers are generally very friendly, and often greet you with a “good morning!” People on the bus are usually polite; moving aside for others, or apologizing when necessary. In fact, when it came to the attention of the university that there was pushing at some of the bus stops, they set up cement queue lines to alleviate the problem.

In my experience, the only times when personal space is not recognized is during home football weekends, when the bus is packed with cheering Penn State fans. Usually, the crowd breaks into a Penn State fight song, with strangers jovially high-fiving each other, and swaying arm-and-arm to the tune of “Sweet Caroline.”

Really, the only thing you have to worry about on a CATA bus is the occasional belligerent freshman who had one too many Natty Lites.

Now, allow me to paint a slightly different picture: the Israeli Egged buses.

For this small town girl, the Israeli buses were difficult to get used to. The bus drivers have very little patience, and often count your money and hand you a ticket while they are driving (multi-tasking at its finest?). There is little to no recognition of personal space, as people cram onto the bus like sardines. Tonight, I felt like I was sharing a sandwich with the guy next to me.

Another big difference from the CATA bus? Lines (or lack thereof).

At the Central Bus Station in Jerusalem, one must go through security before entering the building. If I’m generalizing (which I am), Israelis don’t really have a concept of what lines are. Pushing is almost necessary to get in. This used to really bother me. I decided that I didn’t need to push, and I remembered what my Mom always taught me: “You catch more flies with honey than with vinegar!”

After getting into the station, you then have to “wait in line” for your bus. Everyone is standing around by the platform, seeming so nonchalant about their place in line. Then, all of a sudden, the bus doors open and it’s a free-for-all. It’s every person for him/herself to get a limited seat on the bus. My family witnessed this firsthand on our way home from Tel Aviv, when I got into a verbal smack-down with some woman about our place in line.

You know, just another day riding the bus.

Also, it took me a while to get the hang of all the different bus routes. Usually, there is no harm in taking the wrong bus; it can even be an adventure. But sometimes, it can pose a problem. Take for example, the time earlier this year that I ended up in a modest, ultra-Orthodox neighborhood, wearing my jean shorts and tank top. Passer-bys were shaking their head at me. Men were averting their gaze. Mothers were shielding the eyes of their children. (Ok, I’m exaggerating… but only a little).

Adjusting to a new place can be challenging, especially when you’re in a city setting for the first time. I feel small victories every time I use the transportation system here. But, a big part of me still misses the good ol’ blue loop in State College… belligerent freshmen and all.