Kaddish for a friend and teacher – David Goldberg 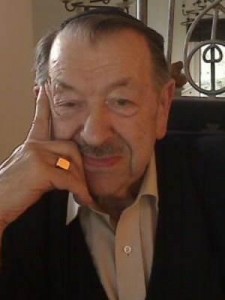 I have just learned that one of my friends and teachers, David Goldberg, has recently passed away.

Given that he has thought me how to lead a prayer service in memory of my father’s yahrzeit, I thought that there would no better opportunity than say the kaddish for him here at Pardes in Jerusalem (which is what I did last night).

David, or Zaide as he was known to many, and I were one of the very few ‘Germans’ in the Edinburgh Jewish Community.  David’s life story was amazing and full of miraculous events.  He grew up in northern Germany and survived the Holocaust by being sent to England on one of the last ‘Kindertransport’ trains.  In fact, he was previously sent to Poland and thankfully his train was sent back to Germany.  He built up his life and business in Edinburgh, Scotland.

When I met him he was still a Gabai (person who helps to organise the running of a synagogue service) in the Edinburgh synagogue.

I also remember his stories of how, in the old days, the richer established part of the community was sitting near to the Bimah (the elevated platform in a synagogue which serves as the place where the person reading aloud from the Torah stands) and how the poorer immigrants were sitting further away.  When I joined the community things very clearly different and such a separation was not visible at all. In fact, David and others in the community were keen to include us ‘newcomers’ as much as possible.

Most importantly, David was a real ‘Mensch’. He was able to keep a pragmatic approach to most challenges and almost always saw the positive. He had a special charm mixed with a sharp sense of humor. In my class with Rabbi Landes yesterday we talked about the Torah being acquired by means of 48 qualities.  Menschlichkeit was one of the categories of  qualities and David represented all of the collective human qualities for such a level.

I was amazed about how David has kept his northern German accent even though he left the country at a very young age. When we studied Jewish prayers in the dark Scottish nights (and they can be pretty dark and cold!!) we used to talk about the old times in Germany and how Jewish life was back then before it was being destroyed. He was able to tell his stories in such a vivid way that I felt like having being taken back in time to pre-WWII time.

He represented what was called ‘the top of the top’ of Europe’s pre-WWII societies. Amos Elon describes in his book “The Pity of it All” the German Jewish society of having reached a high level of human sophistication just before having been targeted for elimination. I had the luxury of having been able to listen to these moving stories&memories. At the same time, he was very keen to hear my stories of modern times German Jewish community.  So, the teacher was learning from the student…just another quality by which the Torah is acquired 😉

David also had a persistent way of explaining the smallest details. I remember how he used to test my patience on the theory of why I should let the kettle rest for a few seconds before pouring it over a tea bag.  Funny enough, I am thinking of David almost each time I make myself a tea and have shared this theory with many others.

I am sure that the memories of him will remain as vivid as he was.  I have known only few other men who have touched the souls of so many others. My thoughts are with all his family and I wish them a long life.