Posted on March 23, 2013 by The Director of Digital Media 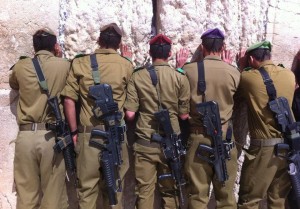 With great power comes great responsibility. Now that the Tabernacle has been completed and we have received the instructions on how to make the appropriate offerings, the next piece of the sacrificial puzzle must be put into place. Who will be commanded with the proper administration and sacrifice of the offerings brought to the alter? Aaron and his sons. The priests are given certain rights which are detailed early in the parasha, but are also expected to be responsible for this critical element in the Israelite’s relationship with God. Similarly, army service in the State of Israel is a responsibility that accompanies the privilege and rights of living in the Middle-East’s only democracy. This week I completed my tzav rishon (first order or first command) which is the official beginning of the army’s draft process.

Tzav rishon consists of multiple stations on different floors of the local draft office. An interview to verify personal information, psychological aptitude, and a Hebrew exam, even for native speakers. A complete medical evaluation, including walking through the hall with the sample cup, two 19 year old girls with an extremely tight blood-pressure cuff, and a bunch of waiting. Finally, a test called the psycho-technical exam (IQ test basically), from which I was, for reasons unknown, thankfully exempt, as well as the verification of details for lone soldiers. Unfortunately I have to return to do the last step, but I was pleased that it only took me four and a half hours. Granted I arrived at 7:15 whereupon I was greeted by soldiers boarding a bus to begin basic training and a dear friend who was on guard duty. I will spare everybody the details, but there were a few moments worth noting.

1) I took the Hebrew test, and could not, at the beginning, understand a single word. The girl administering the test looked at me and said, in Hebrw of course, “Oh, don’t worry, even most native speakers don’t know these words. I started you with the highest level of difficulty.” Great, thanks for that. Luckily I did well enough on the rest of the Hebrew to avoid spending any time in the dreaded Army ulpan.

2) While I was waiting to see the doctor, a young man sat down next to me, a Haredi yeshiva student, of which there were a bunch. He needed help filling out his medical survey, so I helped as best I could. I told him to sign at the bottom once he was finished answering. He looked at me sternly, sat up straight, and told me that his rebbe at yeshiva told him not to sign any papers. Great. I told him that he was just verifying his health, and that it was “safe” to sign. At that moment I was too outnumbered to get into an argument about why he should be serving in the army. I assume that those sitting around me had benefited all their lives from being citizens of Israel, something that has only been true for me since August, and now that they have reached the point of responsibility they were looking for any way out. Imagine if Aaron and his sons used that method.

3) Upon completing the medical section, the doctor offered me a piece of matza to take with me. Only in Israel can they first reduce you to a piece of meat as a means of assessing your value to the army and then offer you a large overpriced water cracker known as shmura matza.

It may be possible to expand the metaphor of rights and responsibilities to the larger biblical emphasis on the Israelites as the chosen people. Leaving aside potentially problematic elements of this notion that arise in contemporary times, the fact is that even as they were chose, the Israelites were given a set of responsibilities. They were to uphold their half of the relationship with God, and later to become a light unto the nations. Aaron and his sons find themselves in a similar situation, enjoying the rights that come with being a member of the priestly class, while shouldering the burden of being the emissaries of the Israelites in their service to God. In modern Israel, every citizen is protected equally under the law, yes there are problems, but every citizen has the right to vote, protest, and hold public office. With those rights come the responsibility, the command, to participate actively in the defense or building of The State. So when I am face to face with individuals who are doing everything they can to avoid national service (civilian or military), I want to let loose and remind them to follow in the steps of Aaron and his sons, as they are given זכויות (rights) they are also commanded (צו).