Our bus returned to Jerusalem an hour before Shabbat candle-lighting time. I quickly biked home to shower and light the candles before heading out to my friend’s place for dinner. It was only at twilight, while walking along the Rakevet (the old railroad tracks that cut across the south Jerusalem) and reading from a commentary on the week’s Torah potion, that some of what I had seen and experienced in the West Bank earlier that day started to come into focus. I was struck by the poignant connection between the week’s parsha and my day’s immersion into The Conflict. 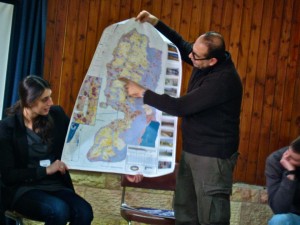 The passage was “Behar” in the book of Leviticus, which deals mainly with the laws surrounding the Shemitta (or Sabbatical Year) and the Yovel (or Jubilee Year). The Torah commands that every seven years the land is to lie fallow, and any fruits that the land produces by itself are to be shared equally with all. And after seven cycles of the Shemitta, or every fifty years, the Yovel is celebrated and all lands are to revert back to their ancestral owners. The commentary I was reading, written by Rabbi Michael Hattin in his book “Passages,” said that what we are to spiritually take away from this practice is that we must frequently “relax our grasp on the illusion of physical permanence that land possession affords.” In other words, the Torah commands us to regularly let go of our ownership over the land in order to remind us that the human desire to have control and possession over land is connected to our desire to delude ourselves into thinking we can achieve permanence in a constantly changing world. And even worse, believing that we are the owners of the land makes us forget that nothing in this world truly belongs to us – as we are merely temporary visitors on this great Earth, and when we go, we take nothing with us.

I remember stopping mid-walk and resting my book on a nearby bench in order to contemplate the meaning of this teaching in light of The Conflict, and specifically in light of what I had learned from my two Encounter-led trips to the West Bank. One of the central lessons I have taken away from these two trips is that the dominant perspective of the Palestinians who spoke to us is that The Conflict is a not a culture clash, nor is it about a religious conflict. The conflict is about one thing: land. Indeed, every time I asked Palestinian speakers whether they harbor any resentment towards Judaism or Jews in general, they always said “No, we have nothing against Jews or Judaism. What we resent is Israelis’ control over our lives.” 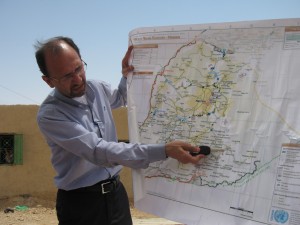 As someone who sees my role in The Conflict as being obligated to educate other Jews about what I have experienced and learned during my year in Israel, I am excited by the prospect of being able to use lessons from the Torah to show other Jews how our tradition not only suggests but commands us to release our grasp on the land for the sake of our own souls. Of course, some Jews take the Torah more seriously than others, and some even argue that the Torah is an ancient document with no relevance for us today. But to my fellows Jews who hold this view, which is a view often hard for me to escape, as well, I would say this: When the Torah was received by the ancient Israelites, it also didn’t reflect the way of the world at the time. In fact, it commanded an end to certain immoral behaviors that were ubiquitous at the time – such as the abuse of slaves, the rape of women, human sacrifice, and so on. This is because the Torah does not to tell us what the world is like now, but rather presents a vision of what it could be. It teaches us about moral codes and ideas of justice that transcend time and space. Therefore, if we as Jews take the Torah seriously as a text which can show us the way to justice even in an unjust world, then I think it’s a Jewish obligation to try to see even the most complicated problems in today’s world through the prism of Torah.

And so at the end of my walk, I started to wonder if the words of the Torah could inspire some Jews. Perhaps this week’s parsha, if held up like a light against the darkness of The Conflict, could inspire some Jews to relax their hold on the conviction that “this land is ours,” and consider instead, “How would I act if I truly believed that this land belonged to G-d, and not any particular people or nation? Would that change anything?” I’m not sure if it would change a lot for many people, but it might create a softening, a subtle letting go. And like a body that softens upon impact instead of seizing up, the chances of survival might be greater.