With apologies to the foodies… 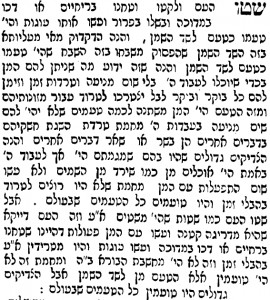 Where is the praise in saying that the manna tasted like oil cake?

It is known that the manna was given every morning so that the people could serve God without having to take time away to feed themselves, and this is why the taste of the manna changed into many tastes, so that they should not take any time away from service chasing after their desires for other foods, such as meat. Now the righteous among them, whose sole purpose was to serve God in truth, would eat the manna as it was when it fell from the heavens and did not “walk about” (shatu) that is, they wasted no time doing anything else to it, because they did not wish to be caught up in trivialities; they tasted any taste in the world they desired. But the people שטו shatu, that is, they acted foolishly (שטות shtut) by feasting (משטים mashtim) (1), for “the people,” as opposed to the righteous, were on a low level (2), and so they “ground it in a mill or crushed it in a mortar, cooked it in a pot and made it into cake,” wasting their time on trivialities, against the intent of the Creator. So they tasted nothing but oil cake, while the righteous among them tasted any taste in the world they desired.

Sources: the taste of the manna…Rashi brings the sources here.

1) All three words are built on the same root and could be seen as variations on the same word.   2) Literally “a small level,” evoking the Hasidic concept of katnut, “small[minded]ness,” a mindset in which we focus on ourselves and our own, usually physical, needs, as opposed to gadlut, “big[minded]ness,” when we focus on our place in the whole and our relationship to others, including God.

A story is told of Rabbi Shlomo of Karlin:

When Rabbi Shelomo drank tea or coffee, it was his custom to take a piece of sugar and hold it in his hand the entire time he was drinking. Once his son asked him: “Father, why do you do that? If you need sugar, put it in your mouth, but if you do not need it, why hold it in your hand!” When he had emptied his cup, the rabbi gave the piece of sugar he had been holding to his son and said: “Taste it.” The son put it in his mouth and was very much astonished, for there was no sweetness at all left in it. Later, when the son told this story, he said: “A man, in whom everything is unified, can taste with his hand as if with his tongue.” (Buber’s translation from Tales of the Hasidim)