It was only 31 hours without sleep. Not so bad, really.

It began at 6:35 am on Tuesday, with a train ride from Hartford to Newark. It continued with three hours of waiting at Newark Liberty airport, most of which occurred in an oddly deserted section of the terminal. ELAL flight 028 was the only flight scheduled for take-off during the entire afternoon, so looking around the gate gave me a pretty good idea of who was going be on my flight: a lot of 18-year-olds, full of ego and yeshiva-speak, heading off to their year of study in Israel. And some heavily bearded rabbis. And an Israeli cohort from Camp Simcha, a summer camp in New York for children with cancer and other serious diseases. And me.

Boarding went smoothly, except for one unfortunate moment during which one of the Israeli Camp Simcha counselors brought a child down the aisle and, not bothering to create a coherent sentence in English, simply yelled, “Cancer! Cancer!” People laughed awkwardly or looked at their feet. 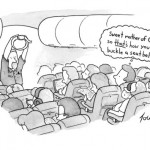 After that incident, however, I thoroughly enjoyed my aisle seat. The middle seat was open, and the window seat was occupied by an outgoing, friendly, curious, loud, artsy 22-year old female from New Jersey. She wore a Blink182 t-shirt and heavily ripped jeans. Her short hair was pulled back into a bun and tamed by a headband with a bow. She shook my hand as soon as she discovered we were seatmates. Then she told me she was so happy that she had someone to talk to and that this was going to be a great flight.

As a person who looks forward to the unique leisure time found only on a plane, in which one is free to read books, do crosswords, and watch movies with no feelings of guilt, I found my seatmate’s introduction a little intimidating. We managed to find a balance, however, between chat time and quiet time. During quiet time, I read The Book of Joe, listened to podcasts, and caught a short nap. During chat time, we talked about Israel, our families, our Jewish lives, boys, and even shared some creative writing (she had an entire binderful, and I had my laptop). It was a little odd, but by the time we got off the plane, I felt like we had been traveling together on purpose.

The flight left Newark at 1:30 pm and landed in Tel Aviv at 7 am. It was not a night flight. I did not get a “good night’s sleep.” When I arrived in Israel, there was an entire day ahead of me – even though there was no night behind me. I stepped out into the warm, humid Tel Aviv air and braced myself for an epicsheirut ride.

And epic it was. There was an older man and woman (who bantered, joked, and complained the entire time) and their granddaughter, who stared sleepy-eyed out the window. The back bench was stuffed with yeshiva boys going back for their second year, and somehow the grandparents and the boys seemed to get along just fine (This confirms my suspicion that certain Jews can talk to any other Jews because they share a common condition called impulse-to-play-Jewish-geography.) Whenever the driver let someone off, he made an odd jerking motion with his head to one of the yeshiva boys, signaling him to get out and help with the luggage. The driver was a skinny old man, so I like to think that he wouldn’t leave the airport without at least one  strapping youth in his van. He was a classic Israeli driver: hogging two lanes at once, talking on his cell phone, honking excessively. I thoroughly enjoyed it. We stopped at Mevaseret Tzion, Bayit Vagan, Har Nof, Hebrew University, and the Inbal Hotel. I was the last stop. Home sweet Baka. 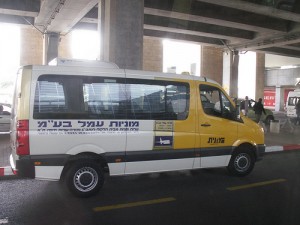 I asked the sheirut driver to drop me off right in front of my building. I had asked at least one of my roommates to be there to let me in (and to help carry my 23 kg duffel up the stairs). I parked my duffel on the porch and went up to knock on my door. No one answered. Huh, that’s weird, I thought. I’ll go down and bring the duffel inside and then try again. When I went out to the porch, however, the outer door to the building swung shut – and locked.

Now me and my duffel were outside, and my wallet, food, books and computer (all in my backpack and carry-on) were sitting upstairs in the hallway. Neither me nor my stuff was actually in the apartment.

I rang every apartment’s buzzer, hoping someone would be home and willing to buzz me in. That didn’t work. Finally, someone with a grocery cart opened the outer door (yes!) and me and my duffel squeezed inside.

I went upstairs to knock some more. I knocked and knocked. I rang the doorbell. I waited. Still nothing.This wouldn’t be such a problem if I had a phone, I thought. But alas, but my Israeli SIM card had been to mailed to me and it, like my new set of keys, was tragically inside the apartment.

Okay, Plan B: Find a phone. Call roommates. Don’t get my stuff stolen.
I knew where I had to go: Pardes.

I trudged around Baka for about 20 minutes, dragging my duffel, wearing my backpack, and shouldering my carry-on full of books. The elevator at Pardes was kind of like an amusement park ride, I was so happy to get in it. When I walked into Pardes with all my stuff, no one looked twice and the office administrators just smiled at me. I logged onto Facebook to see if my roommates had left me any updates. Nothing. I went into the office, wiped some sweat off my face, and began, “I’m in kind of a weird situation…”

Success! I got a hold of one of my roommates, who instructed another one of my roommates to GO TO THE APARTMENT TO PLEASE LET NAOMI IN. I decided to take a cab back to my place, yielding to my jelly-like arms and shoulders. Too bad my street is ridiculously hard to find by car and sounds like “Gad,” which is another street in the area.

I arrived at my apartment for the second time that day. I left my duffel downstairs. I made sure the outer door was open. I went upstairs. I knocked. The door opened and before me stood Santa Claus!

Just kidding. But I was in. And that was my biggest accomplishment of the day so far. And it was only 11:30 am. (I would later find out that one of my roommates had been there when I was knocking incessantly – he was fast asleep.) 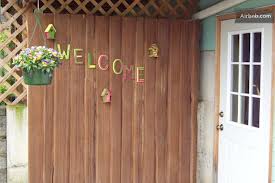 It doesn’t look exactly like that, but our door does say “Welcome” on it.

I managed to stay awake until 8:30 that night. It was mainly will-power that kept me awake. And food. Eating is always weird and scary the first day in a new country, but whenever I did manage to eat, I perked up and found a little more energy to keep unpacking. Plus, it was wonderful to be re-united with Israel’s gluten-free pita bread. Oh, how I’ve missed you…

The past few days have been a whir of going to grocery and houseware stores, spraying bottles of cleaner onto dirty surfaces, folding clothes, seeing people, and walking and walking and walking and sweating while walking. My biggest purchase was a standing fan, which I bought at Home Center (הום סנטר). When I got home, I found out it was self-assembly, and that at least one of the parts was nonfunctional. Tapping into my hidden engineering skills, I used scissors, a pillowcase, and knots to solve the problem. And now I have a working fan. 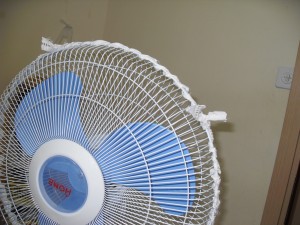 Okay, so here’s a question: remember that post I wrote last January called “Not Yet Adjusted”? Well, I didn’t. I forgot that the first few weeks of living in a new place are freakin’ hard. New home, new roommates, new food, new schedule, different kitchen utensils, different transportation, different language… At times, Jerusalem feels overly familiar – tired, even, with the novelty worn off. At other moments, Jerusalem feels totally foreign – walking different streets, finding the landlord’s embroidered pillows on my bed. I am full of apprehension: will this semester be anything like the last? Will the people be as enticing, as friendly, as motivated? Will I enjoy the same things and be frustrated by different ones? Will I find the same excitement in the texts that was there two months ago?

All I can do is wait; let everything unfold as it will. I will struggle, but with what, I don’t know. I will get through it, but with whom, I don’t know. All I know is how to go along for the ride – and if something breaks, I will use my engineering skills to fix it.