Posted on September 24, 2013 by The Director of Digital Media

AB and I decided to check out Bardak, one of the newest eateries on the Jerusalem culinary scene. Located on the corner of Jabotinsky and Keren HaYesod and squeezed in between Cafe Joe and Olive and Fish, I’d passed by on the bus a few times and it sparked my curiosity. After a friend told me she’d been, it was settled; I’d go too. 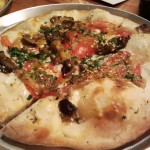 See how the bread looks more like focaccia than pizza? Still good though.

The restaurant advertises itself as pizza and beer, which right away reminded me of Pizza and Brew, a restaurant located in a strip mall in the town where I grew up. Since it was the 80s, that restaurant was dark and filled with smoke. They served large pies and pitchers of cheap beer. I had a feeling though that this would not be that. Anyway, I was curious because both pizza and beer are easy to find in Jerusalem, good pizza and beer are much harder to come by. So, as you probably could’ve told me without having been there yourself, Bardak isn’t exactly a pizza place serving what I, raised on New York pizza, think of as pizza, nor was it exactly of the brick-oven delight variety that we sampled in Croatia last month. The pizzas, available in either personal or family-size trays, were more of the cafe variety in style; in taste they were a bit more creative. 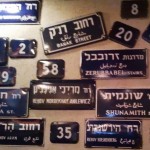 There’s got to be a restaurant supply store that sells these, right?

Bardak’s shtick is Jerusalem. What I mean by that is that one wall is decorated in those blue street signs of Jerusalem streets that seem to be popping up in new restaurants recently (see: Jacko’s Street) and that most items on the menu are named after different Jerusalem neighborhoods (pizza options included the Musrara, the Nachlaot, the Machane Yehuda, and the like). I am a total sucker for things like this. The other, more meaningful, “local” aspect of the joint was that they served both Negev and Shapira beers on tap (and Goldstar) and their considerable list of European and American bottle beers also included the Israeli Dancing Camel as well as the Israeli Sideffect cider.

When I arrived, I noted that the menu I was handed was marked as a temporary menu, so I asked the waitress about it. She told me Bardak had only been open for “month or two weeks” so they were still experimenting, and she pointed me towards a chalkboard on the wall that listed additional items. Board and menu together offered antipasti, three or four types of salads, and many kinds of pizza (as well as the aforementioned beer list and an alcohol list). The pizza options were pretty interesting, utilizing a range of vegetables (heavy on the eggplant, olives and mushrooms, but also others), cheeses, spices, and fish. Some of the options even included hard-boiled egg. There was also the option of regular Margherita pizza with additional toppings. (On the English menu they spelled it Margarita, like the drink, and first I was excited to order a margarita and then confused about what kind of margarita came with “fish options – additional cost.”)

We ended up ordering two personal pizzas to share (plus a Dancing Camel for me and a cider for AB). One pizza came with mozzarella, tomato sauce, roasted eggplant, and chili. We were warned that it was really spicy, but we like spice and whenever a waitstaff tells us this it is never in actuality all that spicy. This? Was spicy. I ended up picking the chilis off so that I could actually taste the flavor of the rest of the pizza. The other pizza we ordered was tamer – a four cheese (mozzarella, pecorino, and two others I can’t remember – kashkaval maybe) with roasted eggplant, tomato, parsley, and sesame seeds. It was sauceless so we were a little concerned it would be too dry, but the juice from the vegetables and the oil from the cheese kept it quite moist. 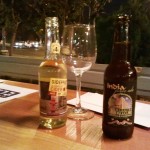 We were pleased with the taste of both orders. Even the dough was delicious, though it was definitely more like focaccia than regular pizza dough (like what I make in the oven at home). We also really enjoyed the laid-back atmosphere. When we were there (around 8 pm) the place was full of people in their twenties/early thirties and families with small kids. Given their extensive bar, I wouldn’t be surprised if it becomes more of a, well, bar in later hours.

Pizza prices are reasonable (30-40 NIS for a personal pizza; 65-75 for a family-size pizza) while beer prices were seemed a bit steep (my Dancing camel was only a few shekels less than my pizza).