Posted on November 7, 2013 by Elana Shilling

I don’t really know what happens when two men fight, having never been a man and thus never had a man fight. But alas! After painstaking research via observation of the male species, surveying video clips on the popular site YouTube, and absorbing pop culture, I have managed to create what I believe to be an accurate representation of the average man-to-man conflict situation.

The first man says, “What the heck dude?”

And the second man says, “Wanna mess? I can take you! I’ll bring you down!”

Next thing you know, a full on brawl breaks out complete with chest bumping and an exchange of fisticuffs.

And there you have it. The man fight. Simple. Eloquent. Effective.

(For more examples of the man fight please see the following biblical storylines:
Cain and Able
Isaac and Ishmael
Jacob and Esau)

If you are a male then you may be surprised to hear that this is not often how conflict manifests in the world of that other gender known as ‘female’. Indeed, women don’t simply ‘come to blows’ in such a direct manner. When women fight other women, colloquially referred to as a ‘girl fight’, we use our cunning, our subtlety and what the men have labelled, ‘mind games’ to best our opponent. Girl fights then are very often long, passive aggressive and sneaky affairs.

I’d like to now examine the girl fight through the matriarchs Rachel and Leah, whose story conveniently takes place in this week’s parsha.

Let’s examine the players: We have two sisters Rachel and Leah, the daughters of Lavan. Leah’s got the eyes, but Rachel is the one with the real good looks of the family. They both marry Jacob due to a nasty low-down trick pulled by Lavan and both women feel that they got the worse end of the deal. Leah is peeved because Jacob loves Rachel way more than he loves her. (And honestly, no offense, but she really isn’t even that pretty.) Similarly, Rachel isn’t too pleased that Leah’s the one having all the children while she’s stuck barren. (I mean really?! Four children? Who does she think she is?) Yes indeed both women are less than pleased with each other and something must soon give. And so the women get crafty. 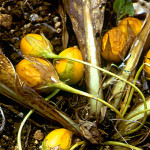 The two women then get into a snarky tiff over a few herbs picked by Leah’s son Reuven:

The situation comes to a hilt:
“Please give me your son’s mandrakes” Says Rachel.
“Is it not enough that you take my husband that you would take my son’s mandrakes too?!” Spits back Leah.

And there you have it. This is the Torah’s narrative of the quintessential girl fight and it is evident just how ruthless a girl fight can be. Though there were no causalities and no physical violence, the rivalry between Leah and Rachel was nonetheless just as ruthless as any man fight.

And yet, something interesting happens.

During the vicious wartime between Rachel and Leah, Jacob meanwhile was fighting a different battle, a battle between himself and his father-in-law Lavan. After many years of arguing and fighting, Jacob comes to the same conclusion that so many sons-in-law have come to realise; that his father-in-law simply does not like him. At all. And so Jacob decides that it’s time to leave Lavan’s house.

But before making such a bold family decision, Jacob decides that it might be a good idea to first run the idea by Rachel and Leah.

A good idea indeed. Because asking four young ladies to pack up and leave their father’s house isn’t exactly a simple request. Moreover, a seventeen-person family road trip with no road games and kids fighting in the back of a caravan does not exactly sound like a good time. And what’s with this Promised Land anyway? Is it not said to be inhabited by seven nations, all looking for a fight?! Gee Jacob. Let’s leave right away!

This is the answer we might have expected Leah and Rachel to give. But it isn’t the response they choose.

This was a bold and brave decision on Leah and Rachel’s part and it was a decision that they came to together.

V’tomarnah, and they said, is not a phrase that comes up often in Tanach and it assumes a sort of unity. Rachel and Leah spoke together, as one. It’s as if they decided to put aside their differences and come together as a family to make this important decision.

And just like that, the Rachel and Leah girl fight ends. The Torah doesn’t mention another word about it and there seems to be a sort of peace between the sisters. In fact, there seems to be peace abound in the entire Forefather family. In the next Parsha, Jacob and Esau reconcile their long standing differences and the many brothers band together to save their sister from a nearby city.

Rachel and Leah can therefore be seen as a model for Shalom Bayit. If Rachel and Leah, the characters behind the quintessential girl fight could put aside their differences and work together, then shouldn’t everyone else be able to do the same?

And this, I believe is the true message behind the story of Rachel and Leah. Yes, Rachel and Leah’s differences are filled with drama and rival any reality TV show that love to watch in our snuggies with popcorn in hand, but their willingness to unite to support their family, demonstrates a strength of character that is truly worthy of our emulation.