Posted on November 11, 2013 by The Director of Digital Media

Newsflash, last week was not the week that we read Chayei Sarah. However, it doesn’t mean that I can’t write about it this week!

A few weeks ago, Pardes took students on two tiyulim, trips. One tiyul, which I went on, I already wrote about. The other tiyul was to Hebron, a city about an hour South of Jerusalem. The tiyulim were a very brief insight into the complexity in Israel and some students were left wanting more. On Thursday night, some friends and I were talking about the places that we had been to and the people that we had met, but felt that it just wasn’t enough. Just as most of the students who went on the tiyul to Hebron, I have only been there once. Conveniently, one of the friends that I was talking with lives in Hebron. He agreed with our concerns, a quick trip to Hebron couldn’t possibly show anyone what the city is like. Spending a few hours in any place, let alone a complex place, can’t give you insight into what the place is like – it’s impossible.

By the end of the conversation, we had plans to go to Hebron for Shabbat. However, this wasn’t just any Shabbat. This was the Shabbat of Chayei Sarah, The life of Sarah. Interestingly enough, the story is actually about the death of Sarah, and this is where Hebron comes in.

The parsha, weekly portion, begins with the death of Sarah and continues with a negotiation between Abraham and Ephron over a plot of land on which to bury Sarah. As the Torah states, this piece of land, now known as Ma’arat HaMachpela, is in Hebron and is the burial site of Abraham, Isaac, Jacob, Sarah, Rebecca and Leah. Just as many of us visit the grave of our loved ones on the anniversary of their death, so too do many people make a pilgrimage to Hebron for this Shabbat.

Another Pardes student and I began our journey to Hebron at about 12 p.m. on Friday. We arrived, after a bumpy bus ride, to a strange site. The city of Hebron had set up 100 tents for the public to use and many more people brought their own tents and had set up camp on any free ground they could find. Tens of thousands of people traveled from all over the country to spend Shabbat in, arguably, one of the holiest cities in Israel. Loud music was playing, charcoal grills were burning, men were dancing in the streets. The atmosphere reminded me of the scene that takes place as people are setting up for a Gator game. 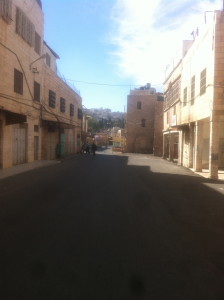 We walked a little bit down the road to the apartment of our friend. While the area around Ma’arat HaMachpela was packed, the street was empty; not even a cat scampered across the road. Besides my friend, the only other people on the street were in IDF uniforms. I’m not sure what the numbers were, but extra troops were brought into Hebron for Shabbat due to the extreme increase in inhabitants. I looked up at the balconies of the apartments along the road – they were all sealed by bars. The entire time that we were in Hebron, I didn’t see a single person on a balcony. Not a child, curious as to why there was such commotion in the streets; nobody.

We arrived at our destination, Beit Hadassah. The building, which has stood there since 1893, was added to and utilized by The Hadassah Organization in 1911 as a clinic and that is where the name is derived from. During the riots in 1929, the building was destroyed and, after many attempts to sustain life there, the Jewish inhabitants were forced to evacuate. It wasn’t until 1979 that a few families left Kiryat Arba in the middle of the night and entered Hebron. When they made it to the center of the city, some small children climbed into Beit Hadassah through an open window and the building has been occupied by Jews ever since. Today, about 20 families live there, including a friend of mine who goes to Pardes (with his wife and daughter) and his in-laws.

Now that I’ve had a little time to process the Shabbat, I see it through two different lenses. The first is through the Shabbat lens. We spent Shabbat exactly in the way it should be spent – we sang, we went on midday walks, we played on the playground, we read stories, we took naps, we ate delicious food, we told stories and we enjoyed the day. And the davening was incredible. I was fortunate enough to enter Kever Yitzak, The Tomb of Isaac, where a minyan had formed. When we got to kiryat Torah, Reading of the Torah, I got goosebumps. I listened to Avraham Avinu as he negotiated for the very land that I was standing upon. I am part of a people that can attest to the fact that not only did our forefathers stand in this place 4,000 years ago, but we were able to stand there today. How many peoples can say that where they began is where they continue to live today?

The other lens that I can’t help but view the Shabbat through is my ever present social justice lens. On one of the midday walks that I took, I encountered an acquaintance. We had met once before, but we weren’t particularly close. I sat down with him and we chatted. He told me about how nice his day was going and how glad he was to have the opportunity to spend this Shabbat in Hebron. He also said that it was a shame that it was Shabbat and none of the stores were open. He hoped that he could return to Hebron during the week to see what the stores had for sale.

Hesitantly, I explained to him that the stores wouldn’t be open, no matter when he came back because the stores were forced to close. I explained to him that the reason he didn’t encounter any of the roughly 250,000 Palestinians that call Hebron home was because they were forbidden from walking on the street that we were sitting on. I drew his attention to the locks on the doors and the bars on the windows. Before I could go on any further he interrupted me.

“I heard about that, but I thought it wasn’t true,” he said.

I didn’t know how to respond. I’m sure that, like my friend, many of the people who spent Shabbat in Hebron were unaware of the political situation in Hebron, unaware of the facts, and thought that the stores were simply closed because it was Shabbat. They would leave Hebron thinking that they had a great time and probably never go back. Unaware of the minuscule Jewish bubble that they had spent 25 hours in, the tens of thousands of mostly American visitors, left Hebron as naive as they entered.

Personally, I left more unsettled than I entered. My time there seemed as if I was on a movie set, a production that had been created to show outsiders the beautiful one-sided story of a place as multifaceted as a prism. As I’ve said to many people, the thing that I’ve learned through my studies of culture, my travels across the world, and my interactions with individuals, one common thread that I’ve seen is how little we all know about so much. I am glad that I went, but hope that people were intrigued by something to the point that they did a little research for themselves.

P.S. Through some web surfing, I found this blogger’s perspective of Hebron with lots of pictures!