Posted on December 29, 2013 by The Director of Digital Media

Day 4:  We awoke pretty early to hit the trail and get to the finish line with enough time to make some decisions about what we wanted to do for Shabbat. At this point, the hike continues in Nahal Amud until it flattens out at the start of the valley to the Kinneret. Here the trail was also very straight forward and easy to follow. 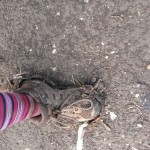 Things were looking good, the map showed that there wouldn’t be much elevation change and that it would be pretty much smooth sailing until the end of the day. However, when we reached a sign that said this portion of the trail was closed on days when it was raining and days that there were heat waves, we were a little concerned, but had no other choice — we had to push on. As we continued, we realized why the trail was closed in the rain. The trail, which was mostly on the edge of a cliff, used hand rails, a ladder, had a railing on some parts, was very muddy and very slippery – and that was when it wasn’t raining. Due to rainfall the previous days, there was a lot of mud, most of which, got stuck to our shoes. It felt as though we were hiking with ankle weights on due to the amount of mud accumulating on the bottom of our shoes. I frequently had to stop to scrape my shoe against a rock and clear it off only so that it could become recovered shortly thereafter. I managed to turn one side of my body black and blue in one fell swoop — it was about time the klutz in me really came out. (Who am I kidding? It came out much earlier than that.) I slipped, landed completely on my butt, on top of a rock, and looked to my right, just in time to see the mud that my shoes had kicked up fall off the side of the cliff, clank it’s way down the rocks, and disappear below the tree line. It took me a second to catch my breath and  stop the image of my impending death from running through my mind. Once I did, I powered through the rest of the day, eagerly awaiting the portion of the trail that was no longer on the side of a cliff. After about 2 hours, that terrain was over and we were inside of a nahal. The view from deep within the stream was incredible. 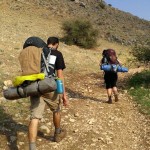 We thought about going into some of the caves that we saw, high above us, on either side of the nahal, but that plan was quickly rejected when we ran into someone on the trail, who informed us that the caves were full of bats with diseases. We pushed onward, not stopping for lunch so that we could dine with the Kinneret as the backdrop to our meal. As we neared the end of the hike, we said “Shalom!” to the Israel Trail and said “Shalom!” to the Kinneret bike path – Shvil Sovev Kinneret. (Anyone else connecting to the scene in Miss Congeniality where Sandra Bullock is talking to Miss Hawaii?) There is a roughly 60 km trail that you can utilize to bike completely around the Kinneret, although the part that we were walking along was not actually within visual distance of the water. 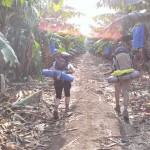 In our Gemara class, we talk a lot about literary structure and the reasons that certain dialogues are documented the way that they are. We’re constantly asking, why was this placed here or why did that Rabbi use this specific phrasing? When we reach the end of the disagreement, we look back, and reassess. I found myself doing the same thing as we neared the end of our journey. Our hike started with a long highway, followed by banana plantations. Our hike closed with a stretch of road, followed by banana plantations. In Gemara, we would call this the envelope structure – a literary technique, perfectly packaging the material in between and thematically linking the two ends of the section. I don’t think that I would have loved a better ending.

While we may have walked a little out of the way, took a few detours, wandered around Israel, the trail was amazing. The route perfectly displayed the highs and lows, wet and dry, mountain and plain, city and nature reserve. Most importantly, it accurately displayed Israel’s amazing hospitality. We were hosted in a hostel for free, given a wrench to acquire water that was sealed shut, given coffee and tea, a place to fill up our water bottles, and as our journey came to a close, a lemon from Kibbutz Ginnosar. We arrived at Kibbutz Ginnosar eager to put down our bags, take off our shoes and jump into the water. We had made it! We traveled a total of 89km starting at sea level, climbing to 1,200 meters, and then descending to -400 meters. We met interesting people, slept in even more interesting places, and shared an incredible journey. But, it wasn’t over yet. 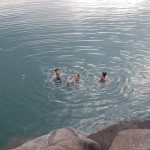 After jumping in the Kinneret and pouring out the water that had travelled with us from the Mediterranean, it was time for a game plan. It was Friday afternoon at about 2 o’clock and none of us were in the mindset to coherently plan for Shabbat. Once plans to travel to Tzfat or Tiberias fell through, in another act of Israeli hospitality, we ended up sleeping on the floor of the children’s house of the Kibbutz. What a strange turn of events. The Kibbutz was hosting a big music festival that weekend, and the hotel was completely booked. Additionally, the entire children’s house was also booked. Thus, we were given some couch cushions, a mattress, and a sort of storage space for the night. Compared to a tent… in the rain… at a mikveh, we were living the life. We were sleeping indoors, had heat, running water, and a shower –  what more can you ask for?

We rotated showering and cooking with only about an hour left before Shabbat. Yearning for much needed rest and yoga, we lit Shabbat candles and sighed a deep sigh of relief and exhaustion. Shabbat was the greatest gift given to mankind and exactly what I needed. The children’s house was a mixture of hippies straight out of the sixties in Manhattan, transported to 2013 in Israel, and young Israelis who loved Irish music. The night was a blur of singing, davening, olive oil, za’atar, and conversing. As exhaustion poured over me, my thoughts lost their coherency. Only getting out of bed for Shachrit and lunch, I was perfectly content reading and sleeping for the entire day.

In the hike’s last display of hospitality, we hitched a ride back to Jerusalem feeling as though we had accomplished a great task. If the trip had a Pardes evaluation, I’d check the “Definitely Recommend” box.