I remember the first time I saw her.

The bus dropped Tamilla and I off in the middle of nowhere, a stop by the side of the road with fields of something green to the left and fields of something yellow to the right. It took another couple minutes for us to lug away the bags of stuff filled with clothes which I had no idea I would never have the time nor energy to wash by hand.

Tamila’s husband, Kolya, was there waiting for us, along with Vassil, another teacher at the school. In preparation of hauling the small department store stuffed inside my suitcases, they had hitched a trailer to his brand new bug of a Silver Lada. Kolya was built like a Gorilla, a former wrestler, perhaps, and he lifted my bags into the rusting green trailer with ease.

Is this her, I asked? No, Tamilla told me. She’s another ten kilometers down the road. Tamilla motioned for me to hop in the back seat, passenger side, but the door wouldn’t budge. “It’s locked,” I told her. Tamilla, all of five feet tall, waddled over and yanked it open left-handed. Never had I felt more manly in my life.

Vassil was beside me in the passenger seat, and I was craning my neck out his window to take in the surroundings. “What do they grow in that field?” I asked, pointing at the leady expanse whizzing by on our left. “Potatoes,” Vassil answered, in a suspicious tone that made me feel a bit unwelcome. “And that one?” pointing at the field to my right. “Also potatoes,” the same doubt ringing in his voice. Who the hell is this American? And how doesn’t he know what a potato field looks like?

We crept up a hill, the last minutes of real sunshine shooting into our eyes, and from the top of the modest peak houses began to take shape in the distance. Not many, spaced far apart, metals roofs and white-washed walls with teal tinted windows, one to a side. 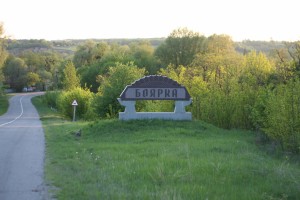 Is this her? The one I had been waiting for? And then I saw the sign. Boyarka. And she was nothing like I’d imagined.

We drove a bit farther and stopped the car. “Welcome to the village center,” Kolya told me, and if it wasn’t for the absolutely genuine smile looking back at me I would have thought it was a joke. I grew up a couple dozen miles from Times Square. And now I was looking at a wide open area, half-paved, with a few small buildings plopped among the various corners in the midst of the wide expanse. There seemed to be no signs, no people, just a desolate sound and a tinge of longing.

They showed me the old store and the new store. Almost exclusively dealing in dry goods, they both sold the same variations of canned goods, sausage, and, if you got there early in the morning, an assortment of breads. Empty shelves reminded me of a New York City Bodega having a going-out-of-business sale, the main difference being the wide array of vodkas available on the counter for purchase by the shot. What’s the difference between the stores, I asked? “The old store is cheaper, and the new store sells alcohol to children,” Tamilla told me, right before she made a stop at both to peruse their identical wares.

They showed me the school, a two story monolith that dominated the village skyline. A parting gift from the Soviet Union in 1990, it hadn’t undergone many (any) repairs since then. A large field stood adjacent, with empty netted goals at either end and two poles on what must be a volleyball court off to the side. How many students, I asked. “140!” Kolya exclaimed with pride. “And you will know them all.” 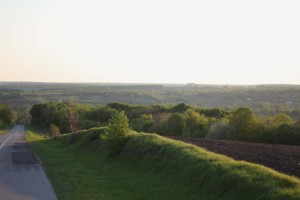 they showed me the river, the mighty Hnily Tikuch, the lifeblood of the region. Kolya, who in addition to his role as School Principal doubled as the local historian, told me that dozens of villages have grown out of this body of water over thousands of years. It quenches the thirst of the plants, the people, the trees and the earth.

They showed me the church, beautiful, Gold-domed, perched on the edge of a man made lake. Frankly, it looked a little out of place, its eastern elegance in sharp contrast to the decrepit buildings surrounding it. Who built this, I asked? “Suprun,” Kolya told me. It wouldn’t be the last time I would hear his name, a man whose money makes the locals tremble at his every call.

Finally, they showed me my house. A five-pound lock circa 1950 was latched onto the door, and it was the cobwebs that struck me most as I walked inside. Paint peeling off the walls, photos of Soviet singers and un-smiling children plastered all over the walls. I look around for the essentials. Toilet? Not a chance. Sink? Keep dreaming. Water? Buckets over here, well is across the street. I wasn’t in suburban New Jersey anymore.

Tamilla and Kolya and Vassil left me to my own devices after feeding me a scrumptious meal, and I carefully laid down my newly purchased sheets on my very hard Ukrainian bed. I was afraid to touch anything lest I get dirt on my fingers which would force me to go across the street to the well to get water to wash it off.

I lay back, and a smile crept over my face. And then I started laughing, almost uncontrollably. This was too weird to be true. I laughed at the village center and at my new neighbors and at my outdoor toilet and at my new life. All of the talk of wanting a challenge, of wanting to exist outside the box, and here I was. Far outside the mainstream of everything I had ever known.

I had found her, my Boyarka. Oh the secrets she had in store.