Am I Any Different? 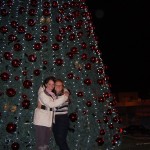 I traveled to Bethlehem with my Jewish roommate on a program called Encounter. I also wrote about it here and here. While waiting in line to take pictures in front of the tree, we saw a Palestinian friend that we had met earlier in the day.

She came over to greet us and we were equally excited to see one another. Surrounded by Aliya’s Arabic speaking family, I became quiet. I heard people talking but it was like noise blurring around me. I looked around, looked down at my phone, as the world moved quickly around me.

“Sarah?” With that, I’m jolted from the daze that I was in and I blink a few times to acknowledge my surroundings. “Do you understand what they’re saying?” A wave of guilt passes over me. I don’t know a word in Arabic; she must have sensed it. I shake my head no.

“They’re talking about how much they hate you.”

Was I still in a daze? Had I not blinked enough times?

When she spoke again, the sarcastic tone in her voice was evident, “That woman just asked my father what the best way to kill you would be. He told her that she should use a saw because the teeth would be painful.” As she spoke, she motioned her hand as a saw across her neck.

“She’s going to chop off your head and send it home to your mother in a box,” this was the most bizarre joke that someone had ever told me.

Without thinking, I returned to my own innate sarcasm, “Will she at least freeze my head so that when my mom gets it, it looks good?”

I couldn’t fathom the basis for her comments. Was she speaking from a place of hatred? Fear? Previous experience?

Or maybe she was imagining my own, supposedly, irrational fear. Maybe running through her mind was the notion that an American Jew was standing in Bethlehem, surrounded by non-Jews, by Arabs, by Muslims. That the American Jew didn’t understand the Arabic words flowing freely from their lips and this must be what her mind is conjuring.

How could she do that to me, put me in a box, assume that I am so closed minded?

Two weeks later, I sat on a train to Haifa. I found a seat, pulled my laptop out of my bag and placed it on the table. Once I was settled, I lifted the top of my computer open and began to work. A Palestinian woman sat down in front of me, facing the back of my laptop. Facing my sticker that had the letter “I” followed by a heart and the flag of Israel.

Immediately after she sat down, I was embarrassed. Should I close the laptop? Should I apologize? She must see the flag and see negativity and hatred. She must have images of violence running through her mind. She must associate the imagery with soldiers and settlers and animosity. Should I force her sit on the train with my sticker staring her in the face?

How were the thoughts in my head different from those in Aliya’s head in Bethlehem? Was I not putting this woman in a box, telling myself what she MUST be feeling? How can I assume that she is so closed minded?

The two scenarios, juxtaposed against each other, embodied so much. I was trying to be open and understanding.  I was trying to show her that there were Jews who weren’t settlers or soldiers. The whole reason that I went to Bethlehem was to hear narratives, record them, in the hopes that telling them would generate social change. That by hearing a perspective so unfamiliar to me, I would be one step closer to affecting something.

I’ve traveled to remote places to explore narratives previously unknown to you and that through the knowledge you have gained you hope to be able to affect positive social change. Perhaps during this personal encounter on the train, I failed. But I’m not defeated. When I get knocked down, I get up again. In order for Aliya’s narrative, Aliya’s desires to be heard, I need to push myself until I can encounter the woman on the train.