Is it just me, or does the opening of Fear and Loathing in Las Vegas sound a lot like the Torah’s ingredient list for the incense offering?

We had two bags of grass, seventy-five pellets of mescaline, five sheets of high-powered blotter acid, a salt shaker half full of cocaine, and a whole galaxy of multi-colored uppers, downers, screamers, laughers and also a quart of tequila, a quart of rum, a case of Budweiser, a pint of raw ether and two dozen amyls.1

Based on the similarities of the two I can conclude the following: Fear and Loathing in Las Vegas is midrash mi’Sinai! סתם סתם!

Not only does it sound like but it really sounds like it. Let’s look at the Hebrew word, קנה בסם, K’neh bosem… why does that sound so familiar? Perhaps the Latin Cannabis is derived from the Hebrew קנה בסם! It makes sense: those succulent slow roasted sacrifices dripping with fat grease and tasty show bread to slop up said fat grease. How else could the Kohanim eat all that food? They clearly had the munchies from the weed in the incense offering! The בסם part literally means “perfumed” and Alcalay renders the root to mean intoxicated.3 This would support the contention of comparative etymologist Sula Benet who argues קנה בסם is in fact the chronic.4

“You stupid, stupid stoner,” you’re saying to yourself as you read this. To be fair, the Alcalay dictionary, the one that matters since that is the same dictionary Moshe had, which I don’t mean literally just that it is an awesome dictionary, translates the קנה בסם together as “sweet calamus.”5 Sounds like a rather innocuous innocent plant that just happens to have an aroma that the creator of the universe, blessed be his name, finds pleasant. Indeed, many English translations of the Tanach including Artscroll translate as fragrant cane. Rather ambiguous, let’s assume for a moment that it is in fact sweet calamus, Acorus calamus. Well, it turns out Mr. Acorus calamus isn’t so innocuous after all causing… visual hallucinations!6 This is from the presence of asarone in the plant. Apparently asarone can also cause upwards of 15 hours of vomiting!7 “Heshy, you don’t look so good. Why don’t you go to the Women’s courtyard and—no, NO! We’re going to need more showbread. DON’T RALPH ON THE MENORAH! Are those oysters? You are so getting karet!” Something tells me HaShem would not have one of the ingredients in the incense mixture something that would induce vomiting in the Kodesh.

Another explanation, Cymbopogon martinii, something from the lemon grass family.8 Bah! That’s no fun. Yet, this is what the Rambam says. At this point my theory of קנה בסם being Cannabis appears to have been crushed. Who can argue with a Torah giant like the Rambam? I’m sure the Rambam, being the Aristotelian rationalist he was, would be open to the educated opinion of scientists and linguists who would beg to differ that the קנה בסם isn’t an ingredient for Thai food. He does have the fact that Jews love Asian food going for him though. The manna? Clearly was Chinese take out in the Chinese take out boxes. The melting of the manna was the sauce seeping through the cardboard. סתם סתם!

This next opinion needs a proper introduction. You know how in Judaism the big shots either get an acronym like Rambam or Rashi or you’re so big people can use your first name and know who they are referring to. When people cite Carl Linneaus,the guy who invented the binomial nomenclature of naming living things (i.e. Lophophora williamsii, Cannabis sativa, Homo sapien, etc.), when people cite him he gets a letter, “L.” You read, “L,” and you think, “wait, who’s L? Oh! Yeah, Carl Linneaus.” What I’m trying to say is that Carl Linneaus is so baller he gets letter of the Latin alphabet dedicated to him. Anyway, Sula Benet quoted L from the Encyclopedia Judaica said that קנבוס even more damning than קנה בסם as it appears in the Mishnah is indeed Cannabis sativa.9 Much of tractate kla’im is dedicated to agriculture and discusses the fibers of Cannabis being used to make clothing. You can be damn sure if there was fibers there was certainly buds and they were being smoked.

Not only do we have a prominent secular source but also that of Ribi Aryeh Kaplan z’l who also contends קנה בסם could possibly be Cannabis sativa, “on the basis of cognate pronunciation and Septuagint readings.”10 Ribi Kaplan’s z’l Living Torah in the Beit Midrash so please see for yourself if you’re are at Pardes! He also mentions the Radak who contends it is cinnamon. The thing is, Ribi Kaplan does not cite a source for Cannabis and in Judaism, the anonymous source always wins.12 So we have a trifecta of etymologist, naturalist, and rabbi who say that קנה בסם is Cannabis sativa.

For the sake of argument, and it can’t get much more damning than if Cal Linneaus and Ribi Kaplan says so, let’s say it is in fact Cannabis sativa. 250 shekels, that can’t be that much, right? 250 shekels equals roughly 100 and a half ounces,13 divided into 16 (16 ounces per pound) you have a little over 6 and a quarter pound of 100% pure uncut sinsemilla cherried atop what could only be construed as a golden bong. Ribi Kaplan says 500 shekels is 25 pounds;14 so according to his calculations there would be 12.5 pounds of ganja in the golden mizbeach. Cannabis also makes sense not only because of the munchies but also the paranoia. It’s the temple, HaShem’s dwelling place, how else better to get temple business done than being hungry and worried someone is out to get you.

What kind of grass would they be using? Snoop dogg said in the name of The Wutang Clan, “Yo, some of that Purple Hizzle on the golden mizbizzle!”

Rest assured if it is in fact Cannabis, it would be the finest Cannabis, probably imported from my hometown of Denver, CO. I’m guessing “kosher kush” would be top nominee for the most acceptable strain. This is an actual strain available and recommended for getting an appetite and has around 20% THC.15 That means it will get you very very high. 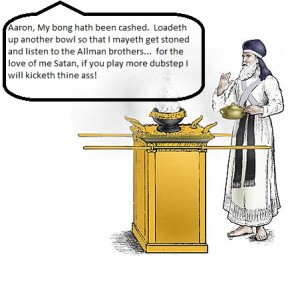 b’Ezrat Hashem the temple will be built in our days complete with golden mizbeach a.k.a. golden bong.