The Signs That Make Me Who I Am

I’ve found that every student at Pardes has a unique backstory, and layer upon layer of reasons for what brought them to this place at this time, each story more intriguing than the last. For me, this summer at Pardes could not have come at a better time. This past year brought some radical transformation into my life. I evolved from living in my own apartment with my girlfriend to moving back home with my family. Now, I am striking out on untrodden terrain, first here in Israel and next in Beijing, where I will pursue a Master’s in International Relations as a Schwarzman Scholar. Professionally, I stepped out of a fulfilling and challenging job that I loved and stepped into years of graduate school and piles of debt. In the middle of all that turmoil, I was fortunate to find a spiritual home at BASE Brooklyn, which I have also had to leave behind as I journey on.

Though a great deal of this year was confusing and fraught with anxiety, it reminded me that not only must we never take the present for granted, but we must always keep our heads up to see what is going on around us and also look within ourselves to see the spiritual signs planted on the path we are following.

In Parashat Balak (this week’s Torah portion in the United States and last week’s in Israel), the mercenary wizard Bilaam is hired by the King Balaak to curse the Jewish people. Whilst on his way to do so, Bilaam is interrupted by an angel. Blinded perhaps by his sense of mission, perhaps by his desire for glory, and maybe by the anxiety brought on by the task at hand, Bilaam does not see the angel standing right in front of him. The donkey that Bilaam rides upon however, does see the angel. The donkey stops. Bilaam, baffled and furious, strikes the donkey and urges him on. Just a few steps down the road, and the donkey sees the angel again. This time, the donkey swerves so suddenly that Bilaam’s foot is jammed against the wall. Bilaam strikes his animal even harder, and the donkey marches on until the roads converge. With the angel standing right in the path, the donkey has no recourse but to lay down on the ground. At this, Bilaam loses all semblance of self-control and beats the animal viciously, nearly to death. Only when the angel finally catches Bilaam’s attention does the beating stop.

We, the readers of the story, know that the angel was standing there and watching the entire sequence of events unfold. Bilaam only needed to look up to meet the angel’s disapproving gaze; he needed only to look within himself and confront his own conscience. But Bilaam chose instead not to look up, nor to look within. He chose the easy path, the path of least resistance and greatest cathartic gratification. He chose to keep beating the donkey.

To the modern reader, Bilaam’s actions are unequivocally repulsive due to his cruelty. Moreover, the lesson of Bilaam’s willful ignorance of his own conscience is an even greater transgression here. His only interest is to continue marching forward. He makes no space for stepping back, evaluating the method of his journey, or checking in with his own value system.

Sholem Aleichem, the grandfather of modern Jewish literature, offered his own interpretation on Parshat Balaak, and the significance of making major life decisions based on your core values rather than impulsive swings of passion. We know the story of Chava, Tevye’s third daughter, from the musical Fiddler on the Roof. Chava elopes with the non-Jewish Fyedka, and subsequently begs Tevye to accept them. Tevye wants to accept them, but ultimately cannot bring himself to do so. “If I bend that far, I will break,” he whispers. The musical, written for post-Holocaust American Jews, celebrates Tevye’s commitment to tradition and Jewish continuity. The original story, written by Sholem Aleichem before the Russian revolution, however, casts Tevye squarely in the role of Bilaam:

“There I was, arguing with myself when suddenly I noticed that my horse had come to a halt. Red light! What could it be? I looked ahead. Chava! […] I jerked the reins to the right and cried “Giddyap there, you moron!” Well, no sooner did my horse veer to the right than Chava ran in front of it again, gesturing as if she had something to tell me […] I got a grip on myself and jerked the reins back to the left. Back to the left runs Chava, a wild look in her eyes, her face the color of death […] And I began to whip my horse for all he was worth. He lunged forward, all right, though he kept looking back and pointing his ears at her.”

Chava, the angel in this story, is left behind. In the musical, as the family leaves Anatevka, Tevye gets the chance to whisper a “God be with you” to Chava, a small moment of redemption. In the original story, Tevye has no such redemption. He never sees Chava again, and his last encounter with his favorite daughter will always be the afternoon he nearly ran her over with his horse. Tevye chastises himself for his actions time and again in the subsequent stories, but he never gets the chance to do it over, and he is never the same jolly Tevye.

Tevye loses sight of his most deeply held value, his love for his family, in a moment of arrogance and passion and pride. These moments when we leave our values behind, and let momentary passions govern momentous decisions are the most dangerous.

In general, I have always felt discontent moving through life only forward and without reflection. I tend to seek out interesting conversations about controversial topics just to challenge my view of the world. In the coming year, I plan to have many such encounters. I will be living with a collection of powerful personalities with strongly held beliefs and deep wells of knowledge to support their opinions. Many conversations will be respectful and civil, but some will likely be emotional and heated. I have spent a great deal of time thinking about how to prepare for this year, and I have settled on a linked pair of affirmations that came out of my Pardes class with Rabbi Amy Eilberg, and with my chavruta partners that afternoon, Caroline and Emma. Both are inextricably linked to the ideas of pausing forward motion and looking around, which are so potently illustrated by the stories above.

The first is גם זה יעבור (this too shall pass). It takes a certain confidence to know that even when your values are assaulted, they will remain firm. In moments of impenetrable darkness, I can take a breath and know that the anger, the anxiety, and the tension will pass. Even if time will not heal all wounds, at least I can know that my emotional life will normalize. This is equally applicable to moments of elation. The knowledge that the euphoria will pass will demand that I treasure those high points all the more.

The second is Abraham’s declaration, הנני (here I am) in answer to God’s call. When the angel stands before me, urging me to be the best that I can and to work hard to defend my values, I cannot cower and I must not ignore him. I must be able to raise my hand, and say “Here I am, and I am ready to answer.”

I will spend the majority of the coming year studying large scale conflicts of all kinds (war, business, policy) and navigating a wide range of minor (and possibly major) interpersonal conflicts, and a conscious awareness of the roots of my values will no doubt serve me well. I can foresee moments when I will want to act like Bilaam and Tevye, and rely on surges of frustration, on flashes of anger to forge ahead without consulting my values. In these moments, I hope I will remember the lessons I have learned and ask myself what really matters.

I came to Pardes hungry for knowledge, but with very few specific expectations. It has only been a week into my Pardes experience so far, but I feel I have already come closer to a place of spiritual center informed by the Jewish textual tradition. I have more questions than I had when I arrived, but that is arguably the most thrilling stage of learning. 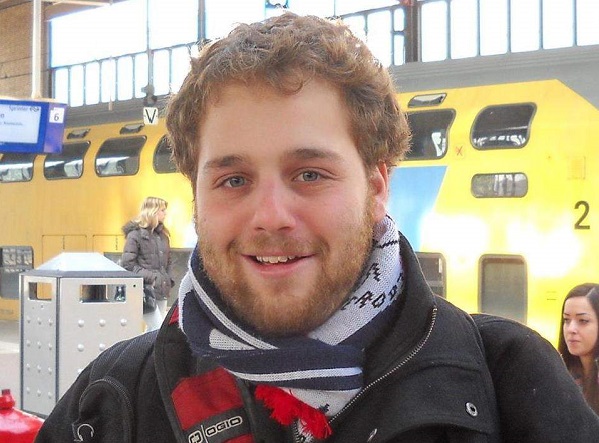