This blog was originally posted on Times of Israel.

I’m staring intently at one of the 40 flat screen TV’s in a standing-room only sports bar in Skokie, IL, and I stand out like a sore thumb. In the mob surrounding me, every soul, patron and server, is laden with Cubs gear. I, on the other hand, am wearing a blue blazer, dress shirt, slacks…and my Red Sox hat. I didn’t think ahead when packing for this business trip. I didn’t expect I’d be wading up to my shoulders in midnight bedlam in this Chicago bar for the final innings of the Cubbies’ date with destiny.

My attire and Sox cap notwithstanding, I’m feeling like part of the gang. High-fives are enthusiastically thrown and received. Expletive-ridden commentary is exchanged freely with my bar-mates. We’re all in it for the Cubs.

The tension is high, and I get it. As a life-long Red Sox fan who grew up in southern New Hampshire, I know what this game means. I vividly remember where I was in 2004, living in Boston, when the Sox broke The Curse, and the jubilation that engulfed the city. I want this for the Cubs. I want it for Chicago.

Suddenly, it happens. The final out is made and the bar erupts! Screaming, crying, kissing. It’s mayhem. I turn to my left – high five! I turn to my right, another high-five! More screaming. Shots of whiskey are being poured and consumed. The local tornado siren, what sounds like a locomotive air horn, blasts at a deafening level provoking a second fierce round of raucous applause.

The chaos around me melts away as I turn quickly to my right to confirm what I believe I just heard. There stands my high-five partner from moments before, arms in the air screaming praise for the Lord in Hebrew. The young barrel-chested man wearing a Cubs shirt, who apparently is under the impression that theology and sports are linked, sees that he has my attention, and I have the distinct sense that his words were for me all along. He turns to me readily and says, “You’re Jewish right?”

All of a sudden, here I am, not a celebrating sports fan, but the Jewish guy in the bar. How did he know? I quickly examine myself. Did he see my kippah peek out underneath my Sox hat during a quick adjustment? That must be it. And the high-five? Was that the permission he was waiting for to out himself to me? I believe so.

He immediately starts talking. He’s Jewish and very proud. In case I’m suspicious, he starts reciting whatever blessings he can remember. He confesses that he can’t recall his Bar Mitzvah Torah portion. If I can figure it out he’ll give me $50. He pauses – reconsiders. No, $100! He wants to tattoo it on his arm; a “sleeve” of his portion as he put it. He’s very excited now, saying that the Jewish people are special and that we need to be proud. His words are energized and what I can discern over the background noise has an almost messianic tone.

Mayhem in the bar continues and I’m still trying to get my footing when the unexpected interaction begins to take an upsetting turn. “I don’t want to die in Syria. I don’t want to die in Syria.” I’m completely confused now, but I slowly gather that he’s in the military, or going into it soon. He explains that he was beat up on frequently throughout his life and was never able to defend himself. And now he’s decided that he wants to do something where he can defend other people. I don’t know what to say. It’s so loud, and it’s all so weird and out of context with the surroundings.

Again he switches gears and starts asking me about the “blessing that is given to the people.” I gather he is talking about birkat hacohenim, the priestly blessing, and I recite it to him, stumbling on the words I know perfectly by heart but which seem so completely out of place in this venue. Hearing them seems to please him. I sense that this is a rather fitting time to extricate myself from the conversation and begin to say good-bye, but he’s reluctant to stop talking. I manage to leave gracefully, if not somewhat confused and oddly shaken.

Walking briskly to my car I try to make sense of this strange interaction. Here I am, the Assistant Director of the Pardes Institute of Jewish Studies in North America, in Chicago to promote the importance of Jewish education, literacy and peoplehood, and I’m rendered effectively speechless by this young man. This man, who does not know the name of his Bar Mitzvah Torah portion, wants to tell me what he does know: that Judaism matters, that his inheritance is a sacred one.

Dumbstruck, I think I failed my barrel-chested bar-mate. He reached out and I recoiled. He proudly praised and I sheepishly demurred.

If you’re out there my proud Jewish friend, I’m sorry for my awkward reluctance to engage. I’m sorry that I did not give you my card and tell you that my work is about connecting with people just like you. If you’re out there, if you read this blog post, there’s an open seat for you in the Pardes beit midrash. Your Torah portion awaits you. 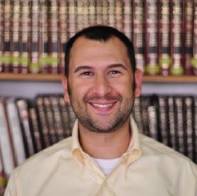