The following is a translation of the news article that appeared in Salom, the Turkish Jewish newspaper.

Pardes visited Istanbul.
Ten young people from the Pardes Institute of Jewish Studies, based in Jerusalem, has brought a brand new and different energy to the Jewish community last week in accompaniment of Dr. Rabbi Levi Cooper, their teacher.
22 February 2017

Thanks to the programs organized together with the UPJS (Ulus Private Jewish School) students and different circles of the community, the Pardes group outdid themselves in raising the awareness and love of the community about education, curiosity and knowledge.

This synergy between the Pardes Institute of Jewish Studies and Turkish Jewish Society was once more created for the fourth time this year under 70 Windows Cultural Events organization.

The Pardes group visited the Blue Mosque, the Basilica Cistern and the Closed Bazaar on Tuesday, February 14th. After having a banquet with Alef youngsters at the Alef building, the young people talked and discussed about Shabbat and personal feelings that it evokes in young people. Afterwards, they went to their homes, putting an end to the day.

On Wednesday, February 15th, the Pardes students toured around Balat and Haskoy to look for the Jewish traces and visited Balat Ahrida, Yanbol, Haskoy Maalem and Abudara, and learnt many noteworthy things about these synagogues. The best moments of the day took place during the visit paid to Balat Or Ahayim Hospital. The group paid visits to the patients and sung cheerful songs. The atmosphere of happiness and high spirits invoked by the group were clearly seen on the faces of the patients. Another beautiful time was experienced when they sung a song for a newborn.

On Thursday, February 16th, the group’s first stop was Sisli Bet Israel Synagogue followed by Ashkenazi and Italian Synagogues. Afterwards, the Pardes group visited Rav Isak Haleva in his office and asked questions. They were duly briefed by the Chief Rabbi about the Jewish society. Thereafter it was time to meet the elderly at Or Yom. Following the lunch, the Pardes group visited every single floor and every single room, and sung songs and cheered up the patients. They also chatted with English speaking older people. The Or Yom visit meant a lot to the group.

After Or Yom, the group went to Neve Shalom Synagogue and the 500th Year Turkish Jewish Museum. They also asked several questions to understand more about the 1986 and 2003 explosions. The Pardes group played a funny and educational game devised by Jaki Baruh and his team with the community’s young people in Alef during the evening. Later on it was time to chat and talk face to face with young people, sharing many great ideas and notions.

The most important leg of the Pardes group’s travel to Turkey was their visit to Ulus Private Jewish Schools on Friday, February 17th. Following Shachrit with students at the Ashkenazi Library, informal teaching classes were held with 5th and 6th grades for one full school day about Shabbat and symbols.

In the evening, during Shabbat and the Arvit prayer that took place at Ortakoy Synagogue with Pardes youngsters (who had zest and enthusiasm), young people, their families and guests danced together and evoked the spirits and energy of the Shabbat. Saturday evening, the Pardes group had their post-Shabbat dinner at Caffe Eden, a kosher restaurant, and continued to sing their songs there so that other guests also had great time.

On Sunday, it was time to visit the Anatolian side. Following the Morning (Shaharit) prayer in Caddebostan Bet-El Synagogue, young people from Talmud Tora and Goztepe Culture Society had breakfast with the Pardes group and took an entertaining instructive course about Shabbat. The last stop for the Pardes group before their return to Israel was Kadikoy Hemdat Israel Synagogue.
This six-day period was very rewarding and instructive for Turkish Jewish Society. The participants enjoyed unique excellent experiences and they spent a meaningful and cheerful week with Pardes students and teachers.

Pia Bildirici, Rıfat Toledo and Gabi Behiri told us about how the time spent with the group helped them to better themselves:

Pia Bildirici: It was a wonderful time! I visited Or Yom with them and afterwards I attended the instructional game designed by Jaki Baruh and his team at Alef. We were at Ortakoy Synagogue for the Kabbalat Shabbat on Friday evening. I had not spent such a joyful Friday for a long time! Dances, songs, speeches, chats…everything was great; it was an excellent organization. First of all, I noticed what the community was lacking and what it needed. If Judaism is such a pleasant and fun thing, then why do they teach us only the rules at school? In my opinion, we are missing the main and great things. Finally, I had the opportunity and pleasure to help people. While I was playing and singing songs at Or Yom, those boad smiles on faces made my day.

Gabi Behiri: Pardes is a very special group for me. Their contributions to me and to my community are too many to describe with words. First of all the fact that they put a smile on the faces of people at Or Yom and Or Ahayim and that they managed to raise their spirits. The fact that they put their hearts in their efforts amazed me the most in a good way. They once more demonstrated to me that we are united and that we are better together. I hope they will continue to do good things for our society for long years to come.

Rıfat Toledo: I certainly agree that Pardes group brings many good things for our community in many ways. It was a highly rewarding and profound experience for me to help them as their guide and translator for four days. They showed me how much religion could be open-minded and fun actually. It was a very pleasing thing to learn new things with them. Although I was so tired that I was hardly standing on my feet when we parted with them, it was worth every minute of it. I will be looking forward to their visit next year!

The Shabbat at Ortakoy
We had a very enthusiastic Shabbat week with twelve Pardes group students led by Rabbi Levi Cooper at Ortakoy Etz Ahayim Synagogue on Friday evening, February 17th and Saturday, February 18th. In the event honored by Rabbi Rav Isak as well, a special Arvit prayer was prayed by students together with the young people on Friday evening. Flamboyant with songs and dances, the Pardes students socialized with community students, and various speakers delivered speeches about Parshat Yitro this week. Feeling very emotional due to this socialization of young people, Rabbi Rav Isak Haleva noted that he was more than happy to be present at such an event. Everyone who attended the evening was very happy and pleased when they left the event as Rabbi Rav Isak Haleva made an explanatory speech about Parshat Yitro.

The same exuberant atmosphere was also present at Seuda Shelishit, the third service of the Shabbat. The Havdalah ceremony, which meant an end to the Shabbat evening, was accompanied by a guitar. Rav Nafi Haleva, the Rabbi of Ortakoy Etz Ahayim Synagogue and Alber Elvaşvili, the President, expressed their happiness to be together with the Pardes group, and their wish to repeat this union every year. 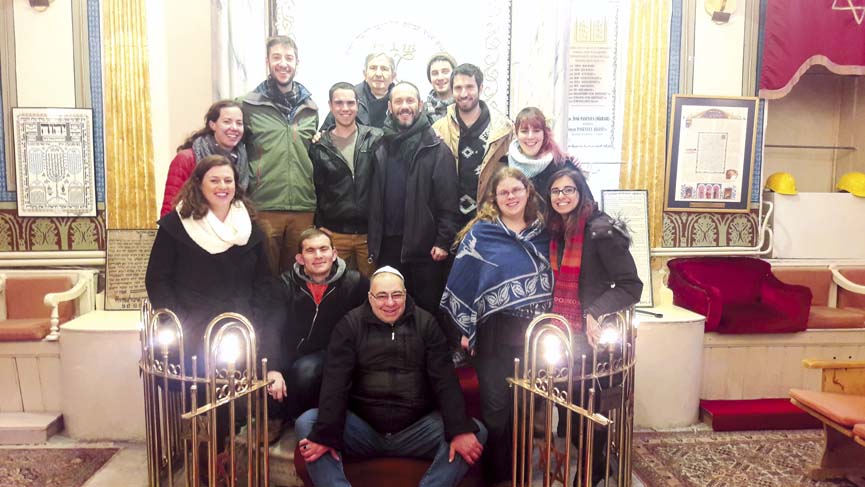