Falling behind and bursting bubbles

This blog was originally published on Miriammuses.com

This is a post about the feeling of falling behind in life. But I should also acknowledge falling behind with this blog. I’m going to blame Pesach (Passover), as any Jewish homemaker or Jewish educator probably would. Here’s a bit of a description. Scroll down for the actual blog if you’re in the category of really not wanting to think about Pesach until March 2018.

Pesach, the ultimate experiential education festival, demands intensive preparation. First there’s the cleaning – we did a lot. Every possible trace of leaven needs to be ousted. To make sure there isn’t even microscopic contamination, the kitchen is turned into a spacecraft, with surfaces covered in tin foil. It sounds bonkers, looks bonkers and probably is, but hey, it’s strangely satisfying and we try to understand it as a spiritual process of clearing that which is “puffed up”, leaven, within ourselves.

Here in Israel , most neighbourhoods arrange for massive vats of boiling water to be set up in the approach to Pesach, so that metal cooking equipment can be dunked, making it kosher for Pesach. Here’s a photo of one of our pots getting the treatment: 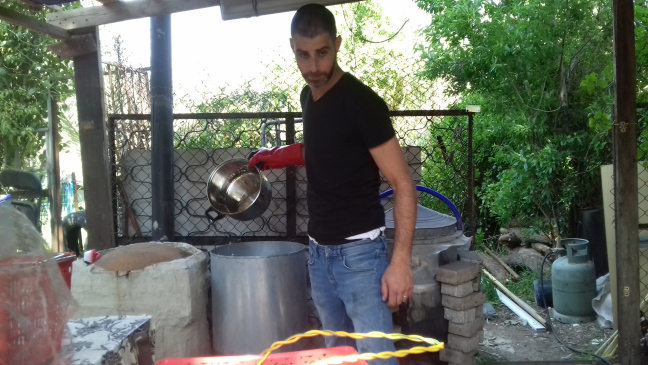 Most important for me this year was our Seder, the immersive service / symbol-laden meal where we tell the Pesach story – the Israelites leaving slavery in ancient Egypt. This year, Harris and I were leading our seder jointly, and we were excited to prepare thoroughly and make it an enriching experience for our guests.

The prep was worth it and our Seder – complete with costumes, a rushed “Exodus” from one room to another through a (blue tinsel) Red Sea, a Greek Symposium style story-telling discussion reclining on sofas and mattresses, and contributions from each of our guests – felt just as we hoped it would: a meeting point between the Seder traditions we all love, and fun new ways of experiencing the messages of the festival.

So that was Pesach. Oh and since my last blog I was also a bit caught up running this series, a 5-part webinar course bringing some of my fabulous Pardes teachers to a UK audience.

Excuses out the way, onto my actual blog. Pardes students are invited to take a five minute slot to share whatever they like with their colleagues. A version of this post was presented to my Pardes cohort recently… 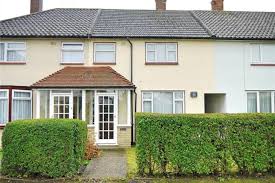 This is a picture of average housing in Borehamwood, my home town, where I grew up, where I’ve lived as an independent adult, where I’m heading back in July. Mostly two or three bed terraced houses, little gardens, post-war architecture… Borehamwood is humble, suburban, not the most aesthetically inspiring town in the world. And yet it is probably the most desirable destination for people in my demographic – Jewish “young marrieds” in our 20’s and 30’s. Borehamwood is home to the UK’s fastest growing Jewish community outside the Charedi world. It’s a place which is a bit more affordable than the classic Jewish areas, meaning that a couple starting out with their first property can afford a little house rather than an apartment, and a little garden of their own. It’s on a commuter train line to Central London. It has an eruv (custom built boundary lines around a place which allow observant Jews to carry or push a buggy in that place on Shabbat). It has a selection of shuls (synagogues) and Jewish schools.

Why am I telling you all this? I’m trying to paint a picture of a place where people start out on married life, buy their first home, put down roots, work hard, buy stuff, maintain a certain standard of living, have a baby, have more babies. Cohorts of young couples graduate through each of these stages together.

The demographics in this community can feel quite homogenous, so differences between where peers are up to in their progression appear very stark. The couple who live in a flat when all their friends have moved into houses; the couple in the early stages of divorce while everyone else seemed to be happily nesting… and then there was us – the couple who couldn’t have a baby when all their friends were having babies.

Our fertility journey started back in 2011 and went on for three very slow years before Noam was conceived through IVF (in vitro fertilisation), after two failed IVF cycles and a year prior to these of “lighter” medication. Along with the physically demanding treatment, it was a painful time emotionally and socially. Going to shul became totally off-putting. Shul was full of new babies and it seemed to me that everyone was sporting a bump or holding a small child. Shabbat table conversations always seemed to return to milk and nappies and the best model of buggy to buy.

I felt left behind in my community, stuck in a rut that I was incapable of getting out of and let down by a body that couldn’t do one of its most essential functions. Harris and I were ready to become parents but couldn’t and our busy lives felt eerily quiet.

My identity as a person who has experienced infertility still goes as deep as, if not deeper than, my very happy 2.5 year old identity as a mum. I will never leave that journey totally behind, and I will always be conscious of the experiences of others in the community going through something similar.

During that time, my mentor said to me: “Miriam, you live in a suburban bubble. There’s a big wide world out there where people your age aren’t even thinking about kids yet. They’re travelling and studying and doing all kinds of varied things”. It was the best thing anybody said to me in that difficult time. Without minimising my pain or telling my that my life plan should be different, my mentor helped me realise that my context was affecting the urgency I felt to have a baby; that a bubble where people are expected to move from one life stage to the next could only add to the pressure on those who didn’t quite conform to the script.

Whatever world we’re in, we probably all feel some level of pressure to conform to a script, to move onto the next step and “keep up” with our peers in one way or other. Wanting to be a mum is just one example personal to me and I can think of many ways in which someone would feel they’re not conforming to family, community, workplace or peer expectations.

Among the many wonderful gifts that my year at Pardes has given me, I’ll always treasure being in a space which holds people from different worlds, who are at different stages of life to one another, make different choices and have different paths ahead.

One of my goals (there are so many more and I promise to write about them soon) as my year at Pardes draws to a close, is to carry a piece of this place back to Borehamwood with me. This doesn’t just mean treasuring the memory of a place outside the bubble, where people are living their lives in a myriad of wonderful ways, but also to try to bring a flavour of “non-bubble” back with me. There are people in Borehamwood who don’t fit the cliched description of “happy young family with 2.5 children”, whether by choice or not by choice. So my task is to work for Borehamwood to be a place where everyone can shine, a place where there’s less cause to feel left behind or at the peripheries.

I invite us all to to look out for others who, whatever context we’re in, might be feeling left behind or like they don’t fit the mould. Let’s challenge expectations, burst bubbles and make the world a less predictable place.