A Time to Glean

Last Friday, after three consecutive days of hiking in the Negev, I woke up at 6:30 am. Rather than sleep in, my roommates and I rolled out of bed, boarded a bus, and travelled up north to a kibbutz near Rehovot. Our mission? To “rescue” clementines that would have been left to rot in the fields. The fruit we gathered that morning was later distributed to over 250 organizations that feed people in need.

The project was coordinated by Leket Israel, an organization that does amazing work to counter food waste in Israel. Since its founding in 2003, Leket Israel has mobilized thousands of volunteers like myself to glean fruit and vegetables from unharvested fields. Leket Israel also collects food that would otherwise be wasted from catered events, corporate cafeterias, army bases, food manufacturers, grocers, farms, and packing houses, and delivers them to the needy.

I heard about Leket Israel from its founder and director, Joseph Gitler. He came to Pardes a few weeks ago to share his inspiring story. It starts at a time that feels uncomfortably familiar – during the worst period of a high-tech bubble triggered recession. Hundreds of thousands of people were going hungry. Parents were sending children off to school without lunch; nonprofit organizations, soup kitchens and homeless shelters were forced to turn people away.

What makes this story special, however, is that Joseph Gitler decided to do something about it. A new immigrant to Israel, Gitler observed far too much perfectly good food being wasted. So in 2003, he began driving his car around Tel Aviv to pick up excess food from banquet halls and restaurants at the end of the night. From there, Leket Israel has grown to what it is today: an organization with a staff of 50 (including Arabs and Jews) and 4,000+ volunteers, who make it possible to rescue 550,000 tons of fresh fruit and vegetables every month. It’s nothing short of extraordinary.

Since I’ve been in Israel, I have been seeking meaningful volunteer opportunities. I’m certainly blessed to spend my year here engaged in serious text study. I am growing here in exciting ways. Still, it is a strange feeling to spend so much time exploring the world of Jewish tradition when the world where people are hungry lies beyond the Beit Midrash.

These days, I don’t have so much time to spare, but I am glad to have woken up early last Friday to pick clementines. It was an opportunity to be outside working the land and assisting those in need. Plus, how often am I able to put into practice the Talmudic concept of Leket (gleaning)?

“When you reap your harvest in your field and forget a sheaf in the field, you shall not go back to get it; it shall be left for the stranger, the orphan, and the widow, so that the Lord your God may bless you in all your undertakings.” 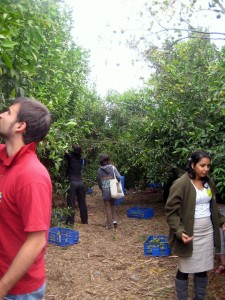