I credit R. Cooper with presenting our group with a broad, illustrative picture of Jewish life in Poland before (and after) the Shoah in addition to exposing us to & teaching us about Nazi horrors. In my posts, I must necessarily gloss over some of the sites we visited because I lack the time to do descriptive justice to every monument, shul, street, courtyard, museum, cemetery and Nazi camp that we visited.

On the 2nd day of our tiyul, we visited the Okopowa Street Jewish Cemetery, the Majdanek concentration camp, and the Chachmei Lublin Yeshiva. Majdanek was the first of three Nazi camps that our Pardes group visited over five days, and I will likely refer to it in later posts when I reflect upon the others; my thoughts in this post were sparked by our visits to the Warsaw Jewish Cemetery & the Lublin Yeshiva. 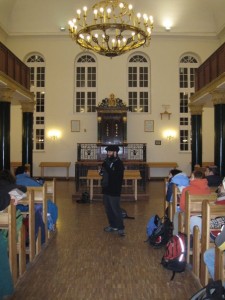 The Chachmei Lublin Yeshiva (CLY) has been renovated to reflect its original glory, but its bookshelves stand almost entirely empty. Its library once included tens of thousands of books, which the Nazis burned in 1939… it took the bastards (my anger breaks through here) 20 hours to burn all of the Jewish holy texts.

I encourage you to read the history of this amazing institution, but I will highlight several points below:

Rabbi Yehuda Meir Shapiro (1887-1933) spent more than half a decade raising funds to build the CLY; he toured Europe, the US and Canada promoting his vision and consulting with rabbis throughout the world. In its time, this yeshiva was a revolution in the Jewish world of education. The corner stone was laid in 1924, and the institution became operational in 1930. It was the first yeshiva to provide housing for its students, and the first to provide them with regular meals. At its peak, nearly 200 yeshiva students studied at the CLY; the brightest young Jewish students came there from around the world; the admissions requirements were incredibly high.

I was glad to hear that R. Shapiro didn’t live long enough to see the Nazis turn his beautiful yeshiva into the local military headquarters. I am thankful that the CLY has been restored and made available to visitors, but its empty shelves tear at me, and the floor of its beit midrash sparkles too brightly. 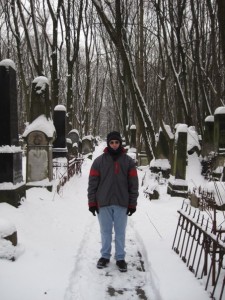 Beautiful shuls and Yeshivot in Poland remain standing as markers of European Jewish history and culture, but the Jewish cemeteries in particular stand out to me as panoramas of time; thousands of Jews lie buried at the Okopowa Street Cemetery in Warsaw; visitors to this site can see the graves of many Jewish generations buried alongside one another in unbroken continuity.

To my mind, the cemetery is a celebration of Jewish life, culture and accomplishment. Famous Jews (like Dr. Zamenhof & R. Soloveitchik) lie buried there in Warsaw, their graves scattered among their Jewish brothers’ and sisters’. The tombstones are all different – some intricately carved into animals, books, and plants. One could spend hours at the cemetery, continuously exploring the sundry Jewish personalities who made their marks upon the world.

I felt this on the morning of that 2nd day when we visited the cemetery, but the roots of this idea spread and took hold when R. Cooper brought us to the Chachmei Lublin Yeshiva that same night. Unlike the CLY, the cemetery continues to serve its purpose… and most Jews who lie there died naturally. The cemetery left me with a profound feeling of peacefulness and shleimut (wholeness, completedness).