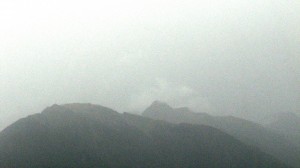 i’ve been wondering for the past few parshot to whom moshe is able to turn when overwhelmed by the responsibility that has been thrust upon him.  as the middle man, he receives all of God’s direct commands while bearing the weight of the people’s fear and doubt.  God is able to rant to moshe about the people’s stubbornness,  while the people blame moshe for their hunger and thirst.  i get the sense that moshe sometimes just stands there stuck silent, listening to an endless stream of complaints and demands on both sides.  and, amazingly, for the most part, moshes takes it, despite the frustration of being the messenger.

this huge parsha, parshat yitro, featuring moshe and God center stage on the mountain, world trembling, shofars blaring, and the ultimating revelation of the ten commandments, begins with a meek, humble moshe receiving advice from his father-in-law, yitro.  not only that, this very parsha, in which moshe facilitates this ground-breaking revelation from God, is actually named after this same non-jewish father-in-law.  in the end, there’s no questioning that moshe steps up to become the leader of the jewish people, a role that he initially begrudged.  however, this same leader still contains with him the baby left by the river, raised without a caring father figure.  this same leader is still the unsure, speech-impaired man, unable to fathom himself as a the mouthpiece of God.

and, leader or not, everyone needs someone to whom they can turn.  someone who will listen and support them.   someone, who unasked, will tell them that they’re making a mistake, that they’re hurting themselves and their people.  and someone who will offer gentle advice to guide them towards fulfilling the huge rule that’s been required of them.  we can’t do these things alone.

a father figure,
lays his hand on his shoulder.
tell me what to do.

may we find these figures of support along our way and be wise enough to heed their advice,