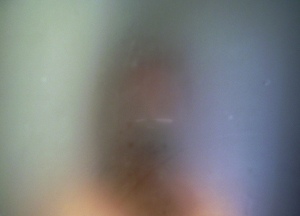 in this week’s parsha, ki tissa, we learn much about moshe and God’s complicated relationship, through the nature of their interactions.  by now, they seem to have developed an interesting dynamic in which God has singled moshe out from the rest of the people, almost as a companion or confidante.  it is moshe that is able to calm God down when He is enraged and it is moshe that is able to talk some sense into God and prevent Him from wiping out His own people in frustration.  and yet, despite the favor moshe has found before God, he is like any other man, unable to see His face.

this confusing dichotomy between the seeming intimacy and yet necessary distance in their relationship is evidenced when God Himself covers moshe with His own hand in order to prevent him from seeing His face and perishing.  there’s a gentleness and care in the very moment in which God shields moshe from His Presence and distances moshe as he does all the other israelites.

but, when moshe comes down from the mountain, he is no longer like other men.   rather, after leaving God’s presence, the Torah writes,”והנה קרן עור פניו וייראו מגשת אליו… …the skin of Moses’ face was radiant; and they shrank from coming near him.” (jps translation, shmot 34:30)  so bright is his skin with God’s light, moshe must put a veil over his face whenever he speaks with the people.  seemingly, for the rest of his time leading the israelites, he must cover his face, only uncovering it when speaking with God.

i live between worlds,
with you: like other men who
cannot see your face.

yet, you’ve made it so,
i can only be with them,
masked, my faced unseen.

may we find companionship even when we find ourselves feeling out of place,