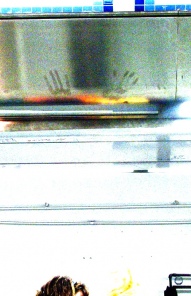 strikingly, this same root (קרב) is later used to mean “bring forward” or “bring near.”  when beginning the priestly induction, the Torah writes, “ויקרב משה את אהרן ואת–בניו… then, moshe brought forward aaron and his sons…” (vayikra, 8:6).  then, further into the ritual slaughter, the Torah writes, “ויקרב את איל העלה… he brought forward the ram of the burnt offering.” (vayikra, 8:18).  just as the rams, which are to be slaughtered and sacrificed are led forward, so too, aharon and sons are brought forward, as they are inducted into the priesthood.  like the sacrificed animals, they too completely dedicate their lives to God, the priesthood and its obligations eclipsing every aspect of their lives.

just before the slaughter, aharon and his sons lay their hands upon the head of the animal.  i want to imagine that in this moment the priests see a part of themselves in these animals.   that in this moment, there is a tenderness or an understanding that passes from one to the other, each just a small vessel in the larger project of service to God.

we are brought forward
where his life ends, mine begins
offering towards God.

may we take part in the work of God while still holding onto ourselves,