Reflections on riding the bus in Jerusalem

In light of the recent bombing in Jeruslam, Pardes alum Courtney Miller (Spring 2010) shares a post of hers from last year.
Courtney has made Aliyah and now lives in Jerusalem. 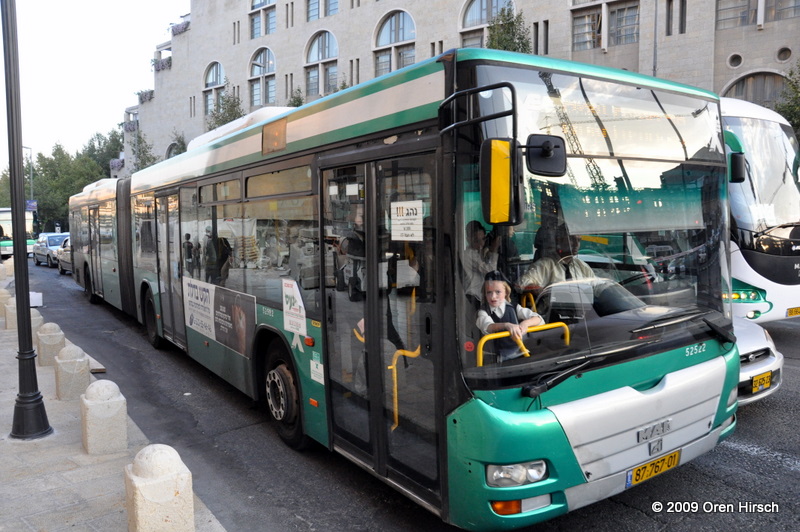 The bus: my constant companion. I wait for her. I get annoyed with her. I marvel at her. I wish I could give her directions that would directly take me to my destination in lieu of her circuitous routes that reach out to everyone. I’m grateful for her despite my frustrations. One of my proudest Courtney trumps Israeli style bureaucracy and spiteful office workers was getting my discounted 6 month student bus pass.

I’m back on the bus today after an attempt to have an affair with the train. The bus was against me. She avoided me. When my fellow waiter (soon to be rider) informed me the bus snuck by silently just before I arrived for our rendez vous I decided to splurge for a cab to catch the train. I flirt with the train- it’s smooth ride and fewer disruptions. She has large windows opening to beautiful countryside, spacious tables, and larger, more comfortable, seats. She doesn’t confine me like the bus does. The bus wants me to stay in my small space defined by chairs covered in blue carpet-like upholstery with electric colored squiggles. But the train is a fickle, infrequent affair. The taxi arrived in time for me to see her sleek body pull out of the station, red warning lights flashing at the crossing.

Frustrated, dejected, I returned to the bus. I had to look for her. And she made me wait, maybe a little longer than usual to make a point. But she accepted me back, ignoring my attempted transgression. So, I board bus 4 Aleph from the south of Jerusalem, to the center. 8 takes me to the Central Bus station and now 480 and baring me to Tel Aviv, where again, I flirt with the idea of the train to take me to Tel Aviv University so that I can at least catch the end of my class and meet in instructor.

The bus in Jerusalem is a microcosm of society. Strangers talk to each other in these double long busses that haul Jerusalemites and tourists alike. A rich brew of Russian, Hebrew, French, Spanish, Portuguese and English bounce around inside, maybe flavored with Yiddish or ***** on the right bus lines. We ask for help, strike up conversations, make comments on everything, invite strangers home, and run into friends. Strangers can become friends on a bus, trapped for the long halting stops through the congested streets. There isn’t just the assumption that we will help each other, but the expectation. Fellow bus riders are constantly helping mothers with strollers alight and disembark through the rear doors, passing their fares up to the driver. The wheelchair ramp isn’t automated but requires a passenger to lean now to open and close it. Today, I was one of 6 people who, without asking even if there was a need, rose to the expectation to help a woman in a wheelchair navigate off the stiff curb, and up the steep ramp into the bus and then pass her fare card to the driver and back. No words are needed; we all know how we’re supposed to help. I live in that alternate reality where youngsters pop up and insist that elderly people and pregnant woman take their seats. These are the moments I love the bus.

The bus in Jerusalem: I love her, I loath her, I wait for her. But I say my blessings that I do not fear her. The fear of busses still clings to our group consciousness. Today, a reminder of that fear was a black roller bag, ownerless, sitting near the front of the bus. “Is this someone’s black bag?” an older man calls out. No answer. Again, “Is this someone’s black bag?” he shouts louder into the back of the bus. “It’s no one’s bag,” the back of the bus answers him. I can see his nervousness. I feel the tension. He looks around. He studies the bag. The bag stares back at him, silently, menacingly. The bag challenges the man at the front of the bus. The man finally accepts the challenge and opens the bag. “Don’t open it,” a voice floats up from behind me. I’m relieved when he’s finished his search and closes the bag. No explosives. We won’t be tonight’s news, unidentifiable limbs mixed with the metal that once was a bus. That terrible, horrible wall that brings international condemnation as a cheap land grab is working. We are free from the reality of the second infatada that blasted its angry shouts with daily suicide bombs and converted the busses from the most popular transportation to a gamble with your life. Soon an elderly woman is running up next to the bus, banging on the windows with her fists. She runs inside, explains she took a taxi to catch up with the bus and reclaims her bag. We, the bus riders, smile inside with relief. Today a lonely bag is just that: forgotten, but not a threat. And again I hate the need for the large concrete wall I can see traipsing across the east of Jerusalem and I’m so thankful that simple concrete can save so many lives.