On his 40th birthday, during a silent Shambhala meditation retreat on a mountain in Vermont, Jonathan (’09-’10, Fellows ’10-’11) asked himself, “what do I really want to do?” And the answer came to him, “I want to study Torah in Israel.”

Soon thereafter, Jonathan applied to Pardes, and received the nicest e-mail from Dr. Meesh Hammer-Kossoy that he had ever received in his life. 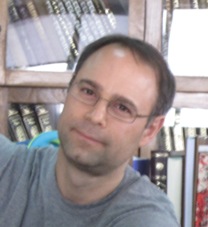 “The Pardes faculty just care so much about your growth, about Torah, about it being meaningful to you, about sharing with you… I am incredibly grateful.”

As a child, he had great enthusiasm for Hebrew school, and as the grandson of a brilliant Talmudist, Jonathan reflected much upon his personal connection to his family’s shared heritage. This wonder drove him to study biblical history at the Alexander Muss H.S. in Israel, and he recalls beginning college at UPenn with a heightened sense of “seeking.”

The young man majored in economics and philosophy, taking a heavy interest in German existential works, Aquinas, and Aristotle. Eventually, his “seeking” led Jonathan back to Jewish study, and he attended a transformative Chabad summer program, which infused him with a strong sense of purpose, which he has “been trying to recapture ever since.”

Several years after his graduation, Jonathan founded a software company during the Internet Boom, and even as he developed his business, the young “seeker” continued taking courses of higher education throughout the NYC area – never missing a single semester. Eventually, he came to feel that he wanted to leave the business, and he applied to Pardes in 2009.

Now a 2010-11 Pardes Fellow, Jonathan says that he plans to attend Hebrew College Rabbinical School after honing his learning skills for another year, and he repeats again and again that his sense of gratitude defines his Pardes experience.

I think the best way to repay them would be to share their gift with others.”