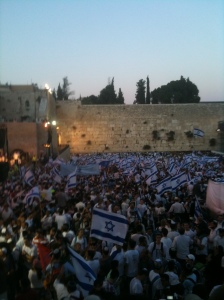 Earlier this week, I was talking with a friend who works for an American company, and she mentioned that she had a day off.  I was confused for a minute, since she works all the time.  Then she reminded me that it was Memorial Day in the US.  Having just recently witnessed the the big four Israeli secular holidays (Yom HaShaoh [Holocaust Day], Yom HaZikaron [Memorial Day], Yom HaAztma’ut [Independence Day] and Yom Yerushalayim [Jerusalem Day]), I started thinking about what Memorial Day means to us in the US.

As far as American holidays go, Memorial Day always seemed pretty low on the list.  July 4th and Thanksgiving are really the only two that hold any meaning for me.  The only significance of the others – Presidents’ Day, Memorial Day and Labor Day – is a day off school, and a month’s worth of tv ads for Macy’s ___ – Day Sale.  So it was unsurprising that without the day off and no tv ads, I had no idea that Memorial Day had even happened.

Compare that to the four days here.  The first two were Yom Ha Shoah (Holocaust Remembrance Day) and Yom Hazikaron (Memorial Day).  On both occasions, the main event of the day was a siren which sounds across the country for a full minute.  I’m sure you’ve all seen the pictures of Israelis standing to attention, but it was amazing to actually see it happen.  When the siren rang, all the cars on the road stopped, everyone got out and stood silently in the street until it was over.  On Yom Hazikaron, something like a third of the country visited a cemetery.  In a country where everybody knows somebody who died in one of the wars or somebody who was killed in a terrorist attack, Memorial Day has real meaning.  The national culture has a lot to do with it.  When night falls the day before, the radios switch over to contemplative music, and the news stations spend the day trying to catch people not observing the moment of silence in order to make an example of them.

Even more interesting is the proximity of Yom Hazikaron to Yom Haaztmaut (Independence Day).  The one immediately precedes the other.  There is an implicit statement in the placement – that one can only properly celebrate Independence if it is preceded by paying tribute to the people who made it happen.  The country spends a full day of sadness and respect, and only then, does it celebrate.  At nightfall, the mood switches over, and having duly honored the builders of their country, Israelis go wild in celebration.  The entire center of town, from the market on one end to the Old City on the other, turns into one massive party, with all of young Jerusalem dancing in the streets.  At every intersection is another famous Israeli band, and in-between people dance till four in the morning.  The next day is a little more laid back, with everyone turning out to parks for barbecues.   I think it is precisely because of the connection between Memorial and Independence Day that the celebration is so great.  When Israelis take the time out to respect their fallen soldiers, they understand all the more so the great gift that they’ve been given.

This is mirrored a few weeks later by Yom Yerushalayim (Jerusalem reunification day).  It celebrates the day that Israelis seemingly miraculously retook the Old City, including the Western Wall and the Temple Mount.  All day, people party like on Independence Day, except on this day, people start in the West, and make their way to the Western Wall in the East.  By the end of the day, everyone is in the Old City, again, in a giant, flag-waving, dance party.

Also interestingly, both days take on a semi-religious flavor.  Though not required, many people recite Hallel, a series of psalms of thanksgiving, which are usually reserved for religious holidays of celebration, when God gave us the gift of Freedom, or Torah, etc.  Both the foundation of the state of Israel, and the return to Jerusalem are taken by many as miraculous gifts from God, on par with the exodus from Egypt.  The are seen as the fulfillment of the Biblical promises that Israel will be returned to Zion.

Given all of that, it is refreshing and illuminating to see a country where the national holidays are taken seriously, even religiously; not just as an excuse to party, but as a time to reflect on the sacrifice and miracles that brought about Israel’s creation and continued survival.