Shrine of the Book – Postcard Commentary #1

The week I arrived here, I knew I would have to make a pilgrimage to the Shrine of the Book (Heykhal HaSefer). To me, it is more moving than is the Kotel, and more inspiring. After all, what other nation has a shrine to a book in the heart of its capitol? Of course, libraries do exist – and they are becoming like shrines unless they have been digitalized… But the Heykahl is so different – a tribute to a technology long superseded but still powerful. What does it say about Israel that the artifact of the book is consecrated as well as the content? 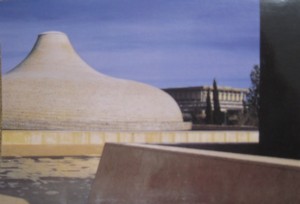 I also knew that when I did go, I would have to write to the man who was my childhood guardian, Robert Darnton; he studied the history of publishing and printing in France during the Enlightenment. To whom else would it be more appropriate to send a series of postcards about a shrine to books? This is the first of six entries written on the back of postcards from the Heykhal HaSefer.