Shrine of the Book – Postcard Commentary #5 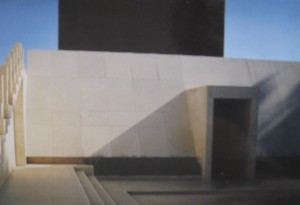 4. The entrance to the Shrine’s underground level, similar to entrances to ancient sanctuaries.

It’s not only the confluence (conflation, overlap and confusion) of ritual and secular life that makes life in Jerusalem out of the ordinary. Another aspect of life in Israel in general (b’gadol as Israelis say) are the layers of history piled one on the top of the next.

I worked on an urban economics project right out of college that looked at the role of Jerusalem in the peace negotiations. One reading of the city’s history was – and remains – that every street has a precious – and political – significance. This reaches an absurd degree in the Church of the Holy Sepulcher, which is like a drop of history that has become putrid over time through sectarian squabbles about which part of Jesus’ life happened where, and to whom that spot belongs. Supposedly, there are specific tiles on which one sect (Protestant, Catholic, Orthodox), and only that sect, is allowed to walk. 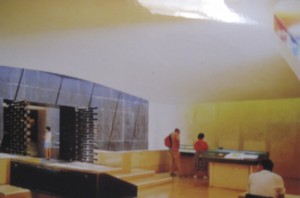