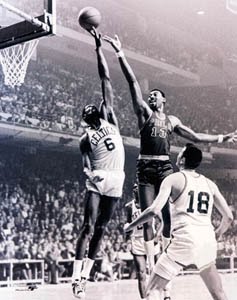 Wilt Chamberlain? There is not doubt that he was great. But, Bill Russel? He’s the best that ever was.

In sports, greatness cannot be measured in simple statistics–if that were possible, Chamberlain would easily be the greatest player in NBA history. But, as any sports fan knows, there is so much more. You must consider competition, era, teammates, and, potentially most of all, championships. Chamberlain was incredible for his generation, but Russel’s greatness transcends time.

In last weeks parsha, Parshat Noach, Noach was described as אִישׁ צַדִּיק תָּמִים הָיָה בְּדֹרֹתָיו, a wholehearted righteous man in his generation. This description seems to suggest that while Noach wasn’t necessarily a tzadik by objective standards, compared to dor hamabul (the morally perverted generation destroyed in the flood) he was exemplary. This description stands in stark contrast to Avraham, who first appears in this weeks parsha, Lech Lacha. Avraham seems to be righteous by any standard. He stood on high moral ground, and lived with amazing moral clarity.

While Noach was chosen as a world was erased, Avraham was chosen as a nation was born. Noach was a faithful follower, while Avraham was an empowered leader. Noach listened obediently; Avraham fought courageously. The Zohar points out that Avraham, in the story of Sodom and Gomorrah, negotiated with G-d in order to prevent the destruction of innocent civilians. Noach, in the famous story of the flood, chose not to plea on the world’s behalf, choosing instead to diligently listen to the word of G-d. This is not meant to detract from Noach’s greatness–he was certainly still a fine role model. In truth, both he and Avraham represent different paths of leadership–each path necessary in its own time.
RaMBaN (Nachmanodies) famously taught מעשה אבות סימן לבנים the actions of our patriarchs are a siman (sign) to future generations. My teacher, Rabbi Alex Israel, presented three potential paradigms for understanding this word siman: 1) If we want to be honest to what the Ramban initially meant, this comes to teach us “historical determinism.” What happened to our patriarchs determines what will happen in the future. While this may be difficult for 21st century minds to relate to, for the mystically inclined RaMBaN it made complete sense. 2) History is bound to repeat itself. While the anecdotes of our patriarchs do not determine our lives, the situations they encounter are inevitably going to arise again. To me, this is a nice middle ground, but such a brilliant innovation. 3) We are meant to see our lives in the stories of our ancestors.
The third paradigm, in many ways, articulates my understanding of Jewish education’s objective. Jews often spend hours arguing over who wrote the Torah, and it’s historical validity. Does it have many authors, only 4, maybe 2, or was it only Hashem? Did the stories actually happen? Could the world have really been created in 7 days? Is a sea parting really possible?
While these questions are important, and are certainly interesting, at the end of the day the answer doesn’t need to matter. One doesn’t need to feel disenfranchised simply because they can’t believe in the historical validity of these claims. While I am not suggesting that these stories didn’t happen, I am arguing that even if they didn’t, that doesn’t need to change our connection to this wonderfully rich faith.
Whether or not a flood took place and a man named Noach built a big ship and was the only human survivor is not the ikar (essence) of the story. If a man named Avram was ever thrown into a fiery furnace, left Terach’s home to go to an area that is modern day Israel, eventually had his name changed to Avraham and we are all his direct descendants simply is not the foundation of our peoplehood. The foundation of our peoplehood is that we tirelessly seeking to have their lessons of hospitality (hachnasat orchim), faith in G-d (yirah), and courage, constantly infuse our very beings.
From Noach we learn to obey; from Avraham we learn to lead. When we can hear both of these messages simultaneously whispered into our two ears we will find ourselves growing tremendously. Let us always remember that our heritage is rooted in shared values, and our stories succeed most strongly when we allow these stories to articulate those ideals.