To Learn & To Teach 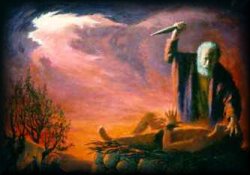 This week, in Parshat Vayeirah, we read one of the most famous, and most troubling, stories in the TaNaKh. G-d calls out to Avraham, commanding him to sacrifice his only son. As if that were not difficult enough, in two separate Midrashim we learn about how eager Avraham was to fulfill this strange mission.

In the first Midrash we wonder why G-d, when instructing Avraham, says, קַח-נָא אֶת-בִּנְךָ אֶת-יְחִידְךָ אֲשֶׁר-אָהַבְתָּ, אֶת-יִצְחָק. “Take now your son, your only one, who you love, take Isaac.” Would simply saying “take Isaac” not suffice? The Midrash suggests that Avraham was so excited to do as Hashem commanded that he wanted to take both his sons!

(Imagine this interaction–G-d: Take your son, Avraham: I have two sons!, G-d: Your only one, Avraham: They are both their mothers only one!, G-d: The one you love, Avraham: I love them both, G-d: Isaac, Avraham: Oh). G-d had to keep narrowing it down, so that Avraham would only take one.

Another difficult Midrash asks why, after being commanded, it says: וַיַּשְׁכֵּם אַבְרָהָם בַּבֹּקֶר “and Avraham got up early in the morning (to prepare for the Sacrifice).” Could it not have simply said “And Avraham got up?” Rather, the Midrash teaches us, that Avraham got up very early, because he was so excited to perform Hashem’s will.

While at first these interpretations seem extremely difficult to understand (and I must admit, I still do not feel fully comfortable with them), I think their rationale is rooted in a belief (as articulated in yet a third Midrash) that G-d will only test those in whom He trusts. Hashem will only challenge those who He knows can pass. Just as a great coach will only push his player as far as the coach believes the player can go, so too G-d will only push Avraham as far as He knows Avraham can go.

Sometimes, however, people fail their tests so miserably, that this position becomes difficult to believe. Unfortunately, this week, we bared witness to the most heinous sports scandal of my lifetime. Numerous individuals stood idly by, as a monster used his position of power to rape innocent children. I can not, and do not want to, fathom the disgusting nature of the raper; his evil is far too great for me to even speculate. But, what I can discuss are the “innocent bystanders” who failed their test in such a remarkable way.

Too many people knew what was going on, and did nothing to stop it. The Talmud, in Masechet Brachot, teaches us the the Wicked, in their lifetime, are called dead; the righteous, in their death, are called living. It seems to me that this is not merely a nice saying; it is an accurate portrayal of the nature of evil. The wicked, in their lifetime, do nothing to stop evil from perpetuating–while they are technically alive, they are as good as dead. The righteous leave legacies of decency that inspire generations–while their bodies are dead, it is as if they are still alive.

Avraham Avinu, in inspiring so much good in the world is still alive. Whenever we chant “Od Avinu Chai” our forefather is still alive, we are affirming the good that he has inspired us all to do. May we all be inspired to such greatness; to a level of devotion and to a love of justice that empowers generations. May we see the day that wickedness disappears, and that righteousness prevails. May we learn our lessons, both good and bad, from what comes before us.