If you read Leah Stern’s recent blog entry on Pardes’ catering manager David S. Berman, you’ve got an idea how eloquent a speaker he is. Anyone entering Pardes is immediately aware of the aromas of delicious things-to-come emanating from David’s kitchen (more on that later).

The Pardes kitchen is a one-man show. Chef Berman does all the menu planning, ordering, and cooking for over 70 students, plus staff and visitors, a job he’s done for almost 8 years. 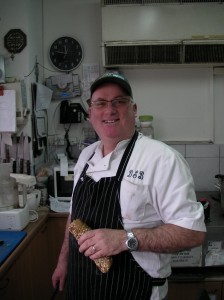 And he’s also a one-man greeter, friend and supporter for the entire student body. David says, “I pride myself in learning everyone’s names in the first month or so. The variety in backgrounds, where they come from, adds tremendous color to the student body. I came from an insular, ethnocentric community, and I didn’t know any non-Jews on an equal footing. I like learning about the Pardes family. Pardes is multi-cultural. I enjoy that a lot; it adds a lot to my job.”

So where does he come from? Can you tell from his accent? David is originally from Cape Town, South Africa, where he lived all his life until he came to Israel in 1987, after graduating from college. While in his last year at the University of Cape Town, he saw an ad in the local Jewish newspaper for a hotel management course in Israel in English for new immigrants. Already having a love for cooking, which he developed in high school through helping to cook and bake at home, he saw that this was a golden opportunity for him.

He finished the course, did internships in hotels and restaurants (management, not cooking!), did some private catering, got married in 2002 and in 2004 landed at Pardes, thanks in part to encouragement from his friend and fellow South African David Levin-Kruss, and to Pardes’ staff member Joanne Barth, whose husband was working with him in the high-tech industry.

“I knew nothing about Pardes before getting calls about the job. Soon, a senior faculty member told me the best thing about Pardes was the students. That was very true. I was not used to meeting Americans and other non-Israelis. It’s been a great match. The students are great. So are the faculty and staff. It’s nice being around new students every year. It’s a good marriage also in the sense that I have a lot of freedom in this small place to try new menus, new recipes. It’s a small kitchen with no door, but lots of windows. I feel blessed in this way. I’m part of the community, not shut away.”

He wishes for a larger kitchen, where he could indulge his passion for baking, which he finds most creative. But he does enjoy the freedom he has at Pardes to try new recipes, new menus. “It’s a small kitchen no door, but lots of windows. And it keeps me part of the Pardes community.”

At home he does the Shabbos cooking, while his wife Rebecca, an educational psychologist, does the weekday cooking for their four young children. He calls his marriage “Berman squared,” because his wife’s maiden name was also Berman… no relation, they checked! Outside of kitchen duty, he enjoys classical music and opera—just visit the kitchen for a sample of operatic music, cantorial melodies, Gilbert and Sullivan—his tastes are very eclectic. Dividing his time between work and home with four growing kids, he doesn’t have much time for hobbies, but does admit to liking art, cinema, and reading, with tastes ranging from fact to fiction to food magazines. “If I had more time, I’d travel the world and go to galleries.”

What does he think of Pardes’ taste? “Kids will eat anything—Mexican goes well, Indian, pasta, cheese, lasagna, baked ziti…as long as there’s a lot of it. One of the things I like is, while I’m limited by the budget and having a dairy kitchen, I have the freedom to vary the menu. Nobody tells me what to make.” Except us, of course, as students, faculty and staff rush to the table to be first in line for David’s fabulous muffins, his creative soups and filling sandwiches. Amazing salads and innovative cakes make community lunch days a weekly treat.

There’s probably not a person at Pardes who doesn’t give thanks to Chef David Berman for nourishing their bodies while Torah learning enriches their souls. If you haven’t stopped by the kitchen to say hello and thank you, please do it soon!