This was it. This was the part of the trip that I had most been afraid of. I had always been afraid of visiting this place, it was part of the reason I had delayed going to Poland until now. The name that is engraved on the heart of every Jew: Auschwitz.

We arrived at Auschwitz in the morning. Dorota Zak, an tour guide and renowned expert on Auschwitz, took us through the camp. Nearly the entire camp has been preserved in its original structure, nothing has been redone for the most part except for setting up the exhibits inside the buildings. I found out a lot about Auschwitz that I did not know before.  For example, the famous sign above the entrance that says Arbeit Macht Frei, Work Will Set You Free, most of the prisoners that were in Auschwitz never saw this sign. They arrived by train at the edge of the camp and came directly into the camp. Auschwitz was also primarily a labor camp and not a concentration camp. Most of the people that died in the gas chambers were sent to Birkenau. 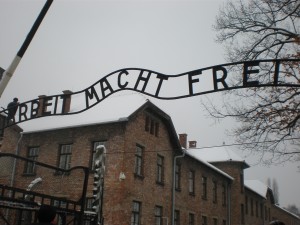 I stood in front of the Arbeit Macht Frei sign, that I expected to feel so emotional about, and I felt nothing. No sadness, no grief, no despair. I walked through the compounds where prisoners were held, saw piles of shoes, human hair, baby clothes. I walked through the one gas chamber that Auschwitz had. I saw all of this, and I felt nothing. I didn’t understand.  I felt like an observer walking through a museum.  These were my own people who had perished and had been worked to death here. Yet I felt nothing, only guilt that I was void of any feeling. 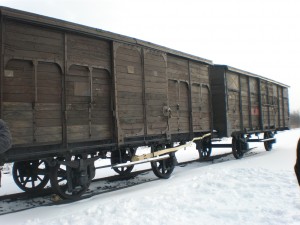 The Arrival Platform between Auschwitz and Birkenau

We got on the bus and drove a short distance to the town right outside of Auschwitz II or Birkenau. Birkenau was built exclusively for the purpose of exterminating the Jews and other unfit peoples such as the Romas (gypsies) or Jehovah’s Witnesses. Many Jews from as far away as Greece arrived on by cattle car on train tracks built between the Auschwitz and Birkenau camps. From there, they were made to march about 2 miles to Birkenau. Many had no idea what awaited them on their fateful march. We did the same march that so many had traveled from the train tracks to the entrance at Birkenau. We trudged through the thick snow in silence. Still devoid of any feeling inside me, the only thing that I could think about was that we knew we would walk out of the camp alive. The Jews who had done this very same march had no idea that most of them would not walk out again alive. 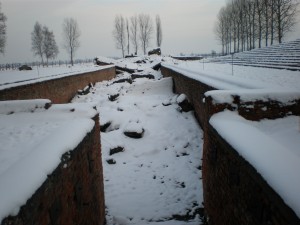 We walked through the entrance of the camp and immediately climbed the stairs to the observation tower. I was shocked to see how immensely large the camp was. Some of the buildings in the camp have been destroyed, but remains of those buildings are still evident and many of the original buildings are still standing. One could see that the camp was built to hold a large amount of people. But we didn’t just stop there. We physically walked through and around the perimeters of the camp. Physically, in our legs, we began to understand  how large the camp was. Even if you hadn’t been sent to the gas chambers, it was easy to see how one who was malnourished could be further weakened by the great distances that one had to walk. We saw the ruins of a gas chamber blown up by a group of Jews as protest to the Nazis. We saw the place where posessions of Jews were taken away upon arrival and how they were used as bartering for extra food. We saw barracks and remains of barracks. It was getting colder and the sun was beginning to set. By now, I would have thought I would have felt something, anything. I couldn’t believe what had happened in this camp had actually happened. It was hard to believe that so many people were killed there because it was so devoid of life. I couldn’t understand what it had actually been like. If I felt anything, I felt numb. I didn’t know how to relate to anything that had taken place here. I didn’t understand how to relate to all the people whose lives had been cut short. 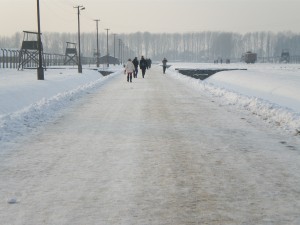 We finally got to a barrack for our closing ceremony. I stood listening to the ceremony, but I did not feel any emotion. I was listening to Levi say how we have the privilege of walking out of here alive. We have the privilege of going back to the land of Israel, a place that so many who were murdered in this place dreamed of going to, but their dream was never realized. The best way we could honor their memory, was to return to Israel, proud of our heritage.  A friend was standing next to me, and was crying silently, standing alone. I had never seen this friend show his emotional side, and I was very shaken by this. I wanted to reach out to my friend, to touch their arm or shoulder, and let them know I was there. But I was afraid of rejection, that they didn’t want my comfort and would push me away. I tried to muster up the courage to reach out and I couldn’t. All of a sudden, my hand shot out almost involuntarily and touched the friend’s arm. I kept my hand there for a few minutes, not sure of what to do. When I had come to the conclusion that I was not going to get a response, the friend reached for my hand. I held their hand tightly as we began to sing עם ישראל חי and walk out of the camp. No words were ever spoken between us. But I knew I had done the right thing, that my friend had needed me at that moment, that they were grateful that I dared to reach out. My friend didn’t need anything to be said. My friend needed me, my presence to keep them strong and remind him that we were fulfilling the lost dream: returning to Eretz Yisrael. A new person had emerged from my friend, they were not the same person that they were before this trip and though I did not have the same reaction as my friend, neither was I. As we walked out of the camp singing, I turned for a last look at the camp. The sun was setting and everything was blanketed in white. I stared at the vastness of the killing machine the Nazis had tried to use to annihilate the Jews. Before turning to leave the camp, I said: “You failed. We are still here.” 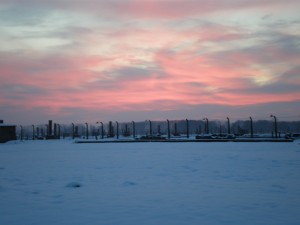