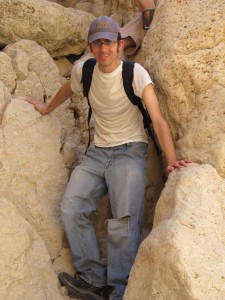 Derek Kwait never spent longer than five consecutive weeks outside of his native Pittsburgh area prior to fulfilling his dream of studying at Pardes last year. After attending one year of film school at Point Park University in 2007-8, he transferred to the University of Pittsburgh in fall 2008. He graduated in 2011 with a degree in writing with a fiction concentration and minors in Film Studies and Jewish Studies– the prestigious Triple Crown of BS. His subsequent life-changing year at Pardes was largely made possible by a generous scholarship from his beloved synagogue, Young People’s Synagogue. He spent the past summer as the mashgiach at Camp Ramah in Wisconsin, so if you have any questions about kashrut during the year, he will be happy to direct you to Rav Meir.
For his fellows project, Derek will be ruining any claims Pardes still has for being a non-coercive institution by running the student blog, “These and Those,” which last year, boasted a record average of 200 hits per day (on average, only 198 of these hits were from spammers, plus another one from Derek’s mother looking for his posts). Derek hopes to build on last year’s success by editing the words “Kim Kardashian” and “sex” into every blog post for as long as he is the editor.
While he is very excited for another year of learning at Pardes, Derek is most looking forward to reading your blog posts.

Laura Herman is originally from Toronto, Ontario. Before coming to Pardes last year, Laura spent three years working at Hillel. One year at the International Center in Washington DC and two years on campus in Toronto. Laura is enthusiastic about diverse Jewish communities and recently discovered her love of text study. She feels that being at Pardes is the perfect place to blend these two passions.

Laura is planning on helping out with Pardes recruitment during the upcoming year and wants as many people as possible to experience the richness of Pardes. She knows first-hand how invigorating it can be to spend a year in Israel and would like to help others have this experience.

When Laura is not learning Gemara at Pardes, you can find her roaming the shuk or at different cafes in Jerusalem. If you ever need to know the best place to get fresh fruits and vegetables, Laura is the person to ask. She’ll only ask that you repay her in mangoes.

Laura is one of the Marla Bennett and Ben Blutstein Scholarship recipients this year!