Jewish Enough – an “It Gets Better” essay from a Jewish perspective

This essay is cross-posted from The Jewish Daily Forward‘s April 13, 2012 issue. The article including this personal essay in The Forward was a collection of “It Gets Better” posts requested from young queer-identified Jews involved with Nehirim, a national community of LGBT Jews founded in 2004:

‘It gets better” applies not just to LGBT people, but also to all of us who are marginalized. One of my greatest anxieties growing up in New York with a Jewish mother and an Irish-Protestant father was that my Jewish peers would not consider me “Jewish enough.” At the sleep-away camp I attended for six summers as a preteen, the Jewish girls said that I could not possibly be Jewish because of my skinny nose and red hair. I didn’t look “Jewish enough.” Then, several years later, at the post-bat mitzvah Hebrew school I attended, I was socially exiled for claiming one day at bagel break that my celebrity crush was Leonardo DiCaprio — a statement met with awkward silence and then a bewildered exclamation from one girl: “But he’s not Jewish!” I was left to wonder what she would have said if I had mentioned that my second-biggest celebrity crush was Keira Knightley.

After that experience, I almost gave up on ever feeling “Jewish enough.” It wasn’t until my freshman year in college that I decided to tap into my Jewish identity again, by going on a Taglit-Birthright-Israel trip during winter break. I found myself surrounded by a lot of students who, like me, came from interfaith and progressive Jewish backgrounds; however, my newfound comfort evaporated during one bus ride, when I got into a heated argument with an Orthodox Jewish student over his claim that if one did not believe that “Jews were God’s chosen people,” one was not truly Jewish. I argued with him vehemently that the belief that Jews were holier than non-Jews contradicted Jewish beliefs about the equal value of all people, and that it was not so different to say that Jews were holier than non-Jews than it was to say that straight people were holier than gay men and lesbians!

The passion that arose inside me as I said those words made me realize that this was a conviction I had been carrying inside me for years, along with the knowledge that I was queer and for that reason also might never be considered “Jewish enough.” These two beliefs, I realized, were linked: My experience as a queer Jew enabled me to see the wrongness of deciding who is Jewish enough in other cases.

Gradually, it did get better. I learned in college that I was not alone in my convictions; that many progressive and even some Conservative Jews had subtler understandings of the “chosen people,” and that all movements except Orthodoxy have lifted rabbinic prohibitions on homosexual conduct. While the benchmarks for what is “Jewish enough” may vary, they all claim that there is some single standard of what it means to be Jewish. But what I know now is that the concept of kavod habriyot, respect for all living creatures, makes this benchmarking of “Jewish enough” irrelevant, because Judaism ultimately upholds the dignity of all human beings, even bisexual redheaded half-Jews like me. 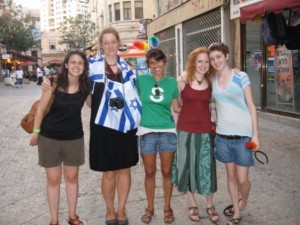