Today I was a Tourist

Cross-Posted from my blog:

(I would have posted this yesterday but I did not have internet) Today is the one day of vacation that is not Shabbat or Chag, that I am in Jerusalem. Therefore, I decided that I wanted to do all the things that I would have done if I was here as a tourist during Sukkot. I went to Machane Yehudah, Ben Yehudah St., and The Old City. This was my first time going to The Old City since I have been in Israel. I have been to Machane Yehudah and Ben Yehudah St. several times. The difference is, that this time I brought my camera. I don’t want to overwhelm anyone with information so I will be breaking it down into several posts. I’ll just say for now that I did in four hours what most tourists would do in two days, and I did it all on foot.
The Shuk was not as busy as I thought it would be. I started out at my favorite place Pri Ha’adama, a ceramics cooperative.This is a picture of the steps leading up to the store. I know, right (so cool)! 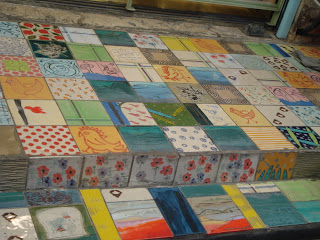 Right next door is Uzi Eli. The man who owns this store believes that the fruit juice that he sells has healing properties. Even if it does not actually  have “the power”, the juice is fresh and delicious! 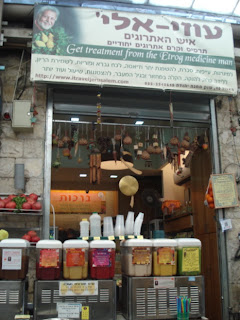 After going to these two specific places I wandered around taking pictures.
The following is easily the strangest/ funniest thing I experienced all day: I went into a clothing store that I had been to about three years ago, which is known for its cute skirts. I picked up a skirt and looked at the tag, it said Banana Republic. I thought nothing of it at first. Then I picked up another, it to said Banana Republic. I looked at each of the skirts again and determined that there was no way these skirts are from Banana Republic. I turned the skirts around and noticed the poor sewing job that had been done on every skirt I looked at. Apparently, someone  was determined to give buyers the impression that these were from a high end, American retail store. They were better off without being tagged and needless to say I did not buy any skirts today.