A good family friend of our’s from Toronto asked me to do him a favour a couple of weeks ago. He is an architect and, as part of his work for a proposal for a Jewish cemetery in Toronto, is researching the signage and organization of different cemeteries. He sent one of his employees to Arlington National Cemetery to see how they help visitors navigate and asked me to go to Har Herzl to take some pictures and collect similar types of material for him. I said yes without even giving it a second thought, he has always been close to our family and I was happy to help. 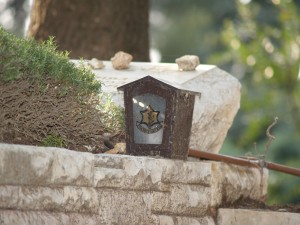 I arrived at the cemetery early Friday morning so that I could run errands afterwards and get home in time to prepare for Shabbat. My plan was to go in, collect the information that I needed and then to leave. Before I walked in, I was humming a shabbat song to myself and remember thinking that I should not sing the song while wandering through the cemetery so that I could adhere to the principle of not mocking the dead by doing things that they can no longer do.

I first went into the dignitary section of the cemetery where Herzl and other political figures are buried. It was quiet, I only saw two school groups there. I didn’t take much notice of what was going on around me, only to note that it was calmer than the last time I was there, which was during the afternoon of Yom Hazikaron (Israel’s memorial day for fallen soldiers) last year.

I then decided to go to the military section of the cemetery, thinking that the information there would be much more useful for my friend’s presentation. I have never seen Har Herzl so empty. On the path on the way in, I only saw two other small groups of people – a few soldiers sitting at the entrance and a group of mourners saying kaddish at one of the graves in the distance. Even though I was there for specific purpose, I tried my best not to just run in and out. I stopped at one grave and read it to try to honour the person as best I could. Although I felt very much like I was running an errand, I didn’t want to disrespect the fallen.

As I was on the way out of the cemetery, I crossed paths with a group of young, uniformed soldiers who were there on a tour. There were over 20 of them and, solely by the way we were positioned on the path, I ended up walking with them the whole way out of the cemetery. I, a Canadian dressed in civilian clothing, was enveloped into the group of uniformed boys. All of a sudden the only thought that crossed my mind was that many of these soldiers will likely either know someone who will be buried at Har Herzl, or G-d forbid, may have to be buried there themselves.

I was overcome with emotion. I felt like an outsider. I felt grateful for their contribution to Israel and for their part in enabling me to live here. I felt inadequate in my contribution to life here. But most of all, I just felt sad.

I had expected to simply walk into Har Herzl, collect what I needed and to walk out. Instead, I was hit hard with one of the realities of life in Israel. I am still sitting with my sadness from my experience this morning and am still humming the same shabbat tune to myself. I will try to hold onto the imagery that each of these represent as I enter Shabbat tonight, hopefully with a greater appreciation for my time here and all that it entails.