Falling in love with Tel Aviv

Posted on November 4, 2012 by Cara Abrams-Simonton

So there is this thing. Tel Aviv vs. Jerusalem- and I’d say probably the majority of your average secular Israelis would say Tel Aviv, hands down. Now don’t get me wrong, I’m in love with Jerusalem… there is incredible history, beauty and complexity here. But there is something else going on in Tel Aviv, and I like it.

First off its a metropolitan city that just feels more city-like… tons of cafes, bars and restaurants that call my name everywhere I go… “Cara, come have a civilized glass of wine on this uber-cute street and watch the world go by.”

Secondly there is the sparkling Mediterranean and incredible biking and walking paths the stretch from Yafo to north Tel Aviv, which is heaven. Even on October 27, 2012 it was warm walking this stretch in the afternoon… And the other biggest highlight in my mind right now, I have some amazing friends who actually live there!

Amazing Abra Cohen continues to host me and introduce me to interesting places, people and fun. Friday I took the train into Tel Aviv and walked the fifteen minutes to her adorable, chic, Israeli-style hipster-filled, gentrified neighborhood called Florentine. I am now familiar enough with the area to know where I am! After catching up a bit on the balcony of her and Joseph’s studio apartment, we walked down to the shuk (market) and experienced the pre-closing shopping crowd. 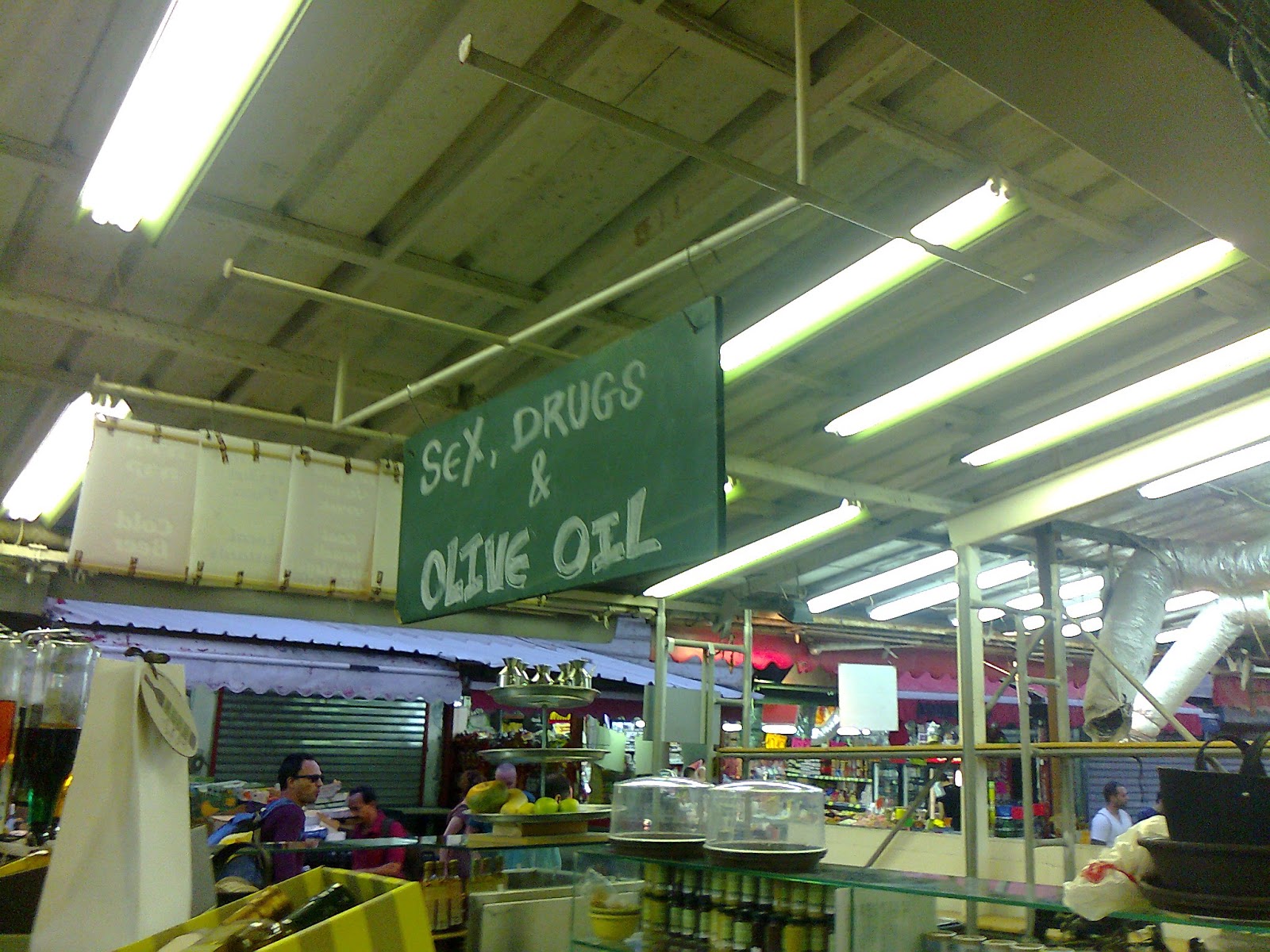 Highlights include: at one fruit and vegetable stand I wanted to buy one lemon so I handed it to the man to weigh it and he replies, “מה זה? אחד” (What’s this? (Give me) one shekel), it was very clear he was annoyed by my lame, singular purchase on a Friday; finding a bottle of French rose I used to get at Trader Joe’s for about $8; looking up to the stormy grey blue sky and seeing a bolt of lightening; and buying an amazing olive mix in a posh little shop that felt out of place in the crazy shuk, where a sign reading sex, drugs and olive oil hung, see right.

Back in the studio they are subletting, Abra started cooking and we opened the bottle of rose. I provided some sous chef support and attempted to do some homework, like a good graduate school student, or something haha. Eventually a friend of theirs joined us for dinner. We had a lovely meal of salad, pita and hummus, rice and curried coconut lentils, and of course, red wine. Later a few other friends joined the festivities, including my former teacher Mika from my Hebrew distance learning I did from home in April and May! It was so amazing to finally meet her in person. She also lives in the neighborhood and was so lovely to spend time with. Overall it was an incredible evening. 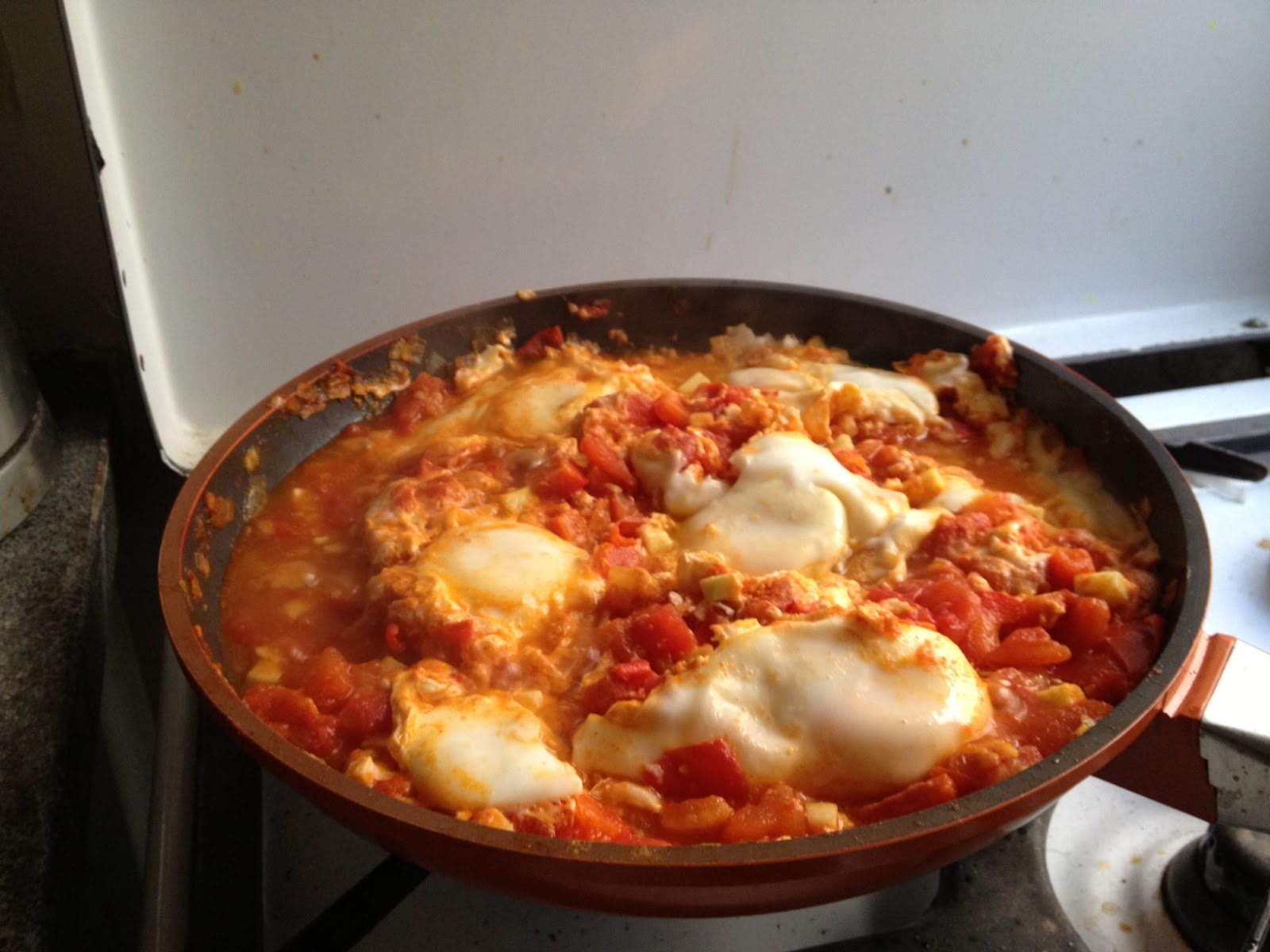 In the morning Abra and I made shakshouka – a dish of eggs poached in a sauce of tomatoes, chili peppers, onions, often spice with cumin. It was so yummy. We then met our other Oregon girlfriend, Dorit and all walked along the beautiful ocean to Yafo. Dorit and I go way back to a Shabbaton for young Jews in Portland when we were both 13 or so… After Yom Kippur services ended this September, I ran into her here in Jerusalem. We were at the same services and connected randomly outside. Amazing world.

Back to Tel Aviv… It was sunny, the boardwalk was filled with families out for a walk, the day was just lovely. When we got to Yafo, we all got massive frozen yogurts with fresh fruit (pomegranate seeds, mango, kiwi and tahina for me, yes tahina on frozen yogurt is super tasty, ממש טעים) and sat and chatted, getting to know one another more and laughing at all our moments connecting through Oregon culture. Eventually we came to this large warehouse space. One space housed an art gallery with photographs of a vineyard somewhere in Israel… and the other side… well there was an Israeli sample shoe sale in warehouse and THE best people watching ever- wow, leather shoes and handbag induced visual orgasm! Seriously it was one of the most incredibly stimulating experiences I have had in Israel. Both Abra and Dorit seriously checked out boots, and Ms. Abra actually bought a pair, after, hmmm, a bit of time speculating. Here we are celebrating her decision! 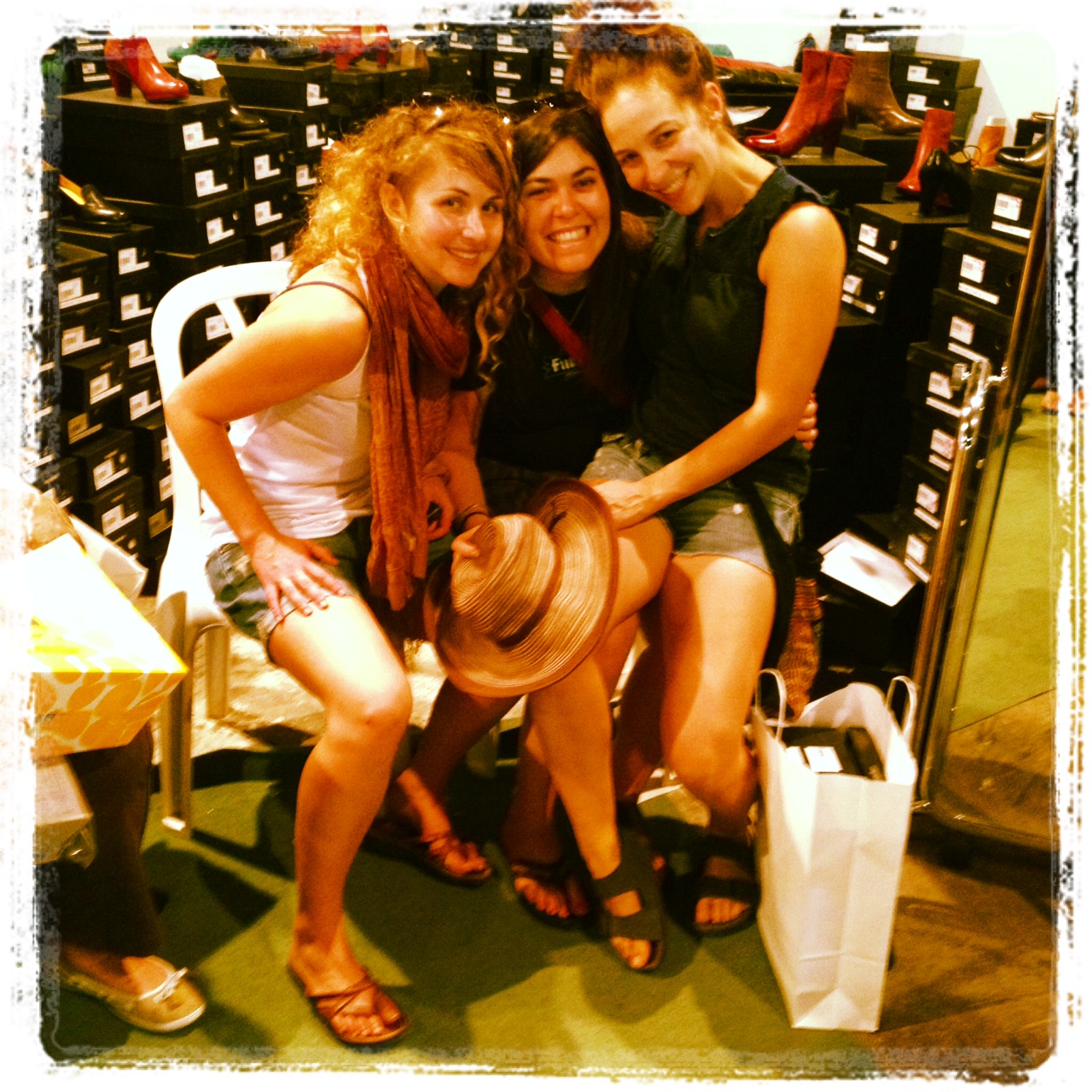 We walked into Yafo a bit more and I got a fresh savory pastry from this huge bakery. The young man helping me started to ask me where I’m from and why/how I speak Hebrew, the usual questions when they hear my accent, and then he asks me if I speak Arabic, and I say no… then Dorit responds to him in Arabic! It was an amazing moment. He got excited and gave us two free rugeleh, which are little sweet pastries, usually with chocolate. We then walked to a convenience store to by some essentials… a few beers to drink on the beach. The sun was already down when we arrived at the beach but the sky was still lit with the warm colors of sunset. After our beers and relaxation, we walked back towards Abra’s apartment and stopped and had burgers for dinner.

The guy who took our order joked about Abra’s name sounding like abracadbra and when they announced over the speaker for her to come get her burger, he called her abracadabra, it was so funny. We went home, I grabbed my bag and we caught a sherut, which literally means service, but is like a shuttle or large taxi or small bus. Her friend had a house warming party at her new apartment on Dizengoff street, one of the main streets in Tel Aviv. They have roof-top balcony that is huge and the party was happening, with a DJ and tons of people. Eventually I left and caught a sherut back to Jerusalem. At one point in the ride I dropped my cell phone behind the seat, and this Southeast Asian woman with broken Hebrew helped me find it by hollering at the driver to turn the light on. It was quite an experience to cap off an awesome, fun-filled weekend in Tel Aviv.

In short, I’m starting to fall in love with this city and look forward to exploring more. I still haven’t even gone to a museum yet! 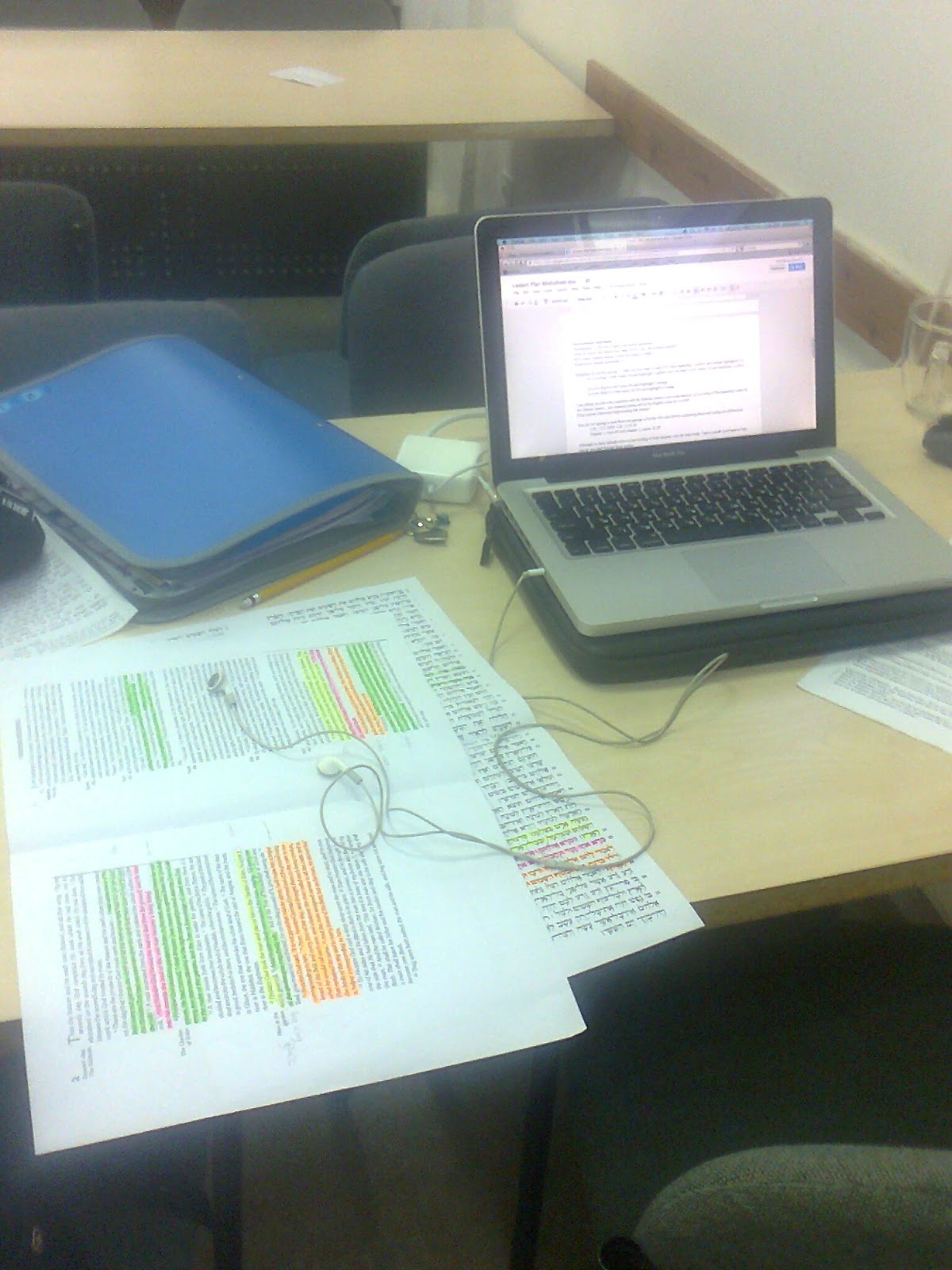 Had to include this picture I took last week, one night when I stayed late to work on the practice lesson I am preparing to teach this upcoming Thursday. I spend many hours in this room… Here I am working with the first two chapters of the first book of the Five Books of Moses or the Torah, Genesis בראשית (Bereshit) and focusing on two verses in particular in the two creation stories, one in each chapter. The relationships between man with nature, the land and animals, are different in each story and I plan to highlight these differences, in particular the Hebrew verbs central to the verses, and reflect on the two models for man’s relationship with nature presented in the Torah. In the first mankind has dominion over the land and in the second the man tills and tends the land. More to come…