Posted on November 5, 2012 by Heather Kantrowitz

By the time I get home at night, I’m usually completely wiped out and ready to relax or go to bed. But I’ve been wanting to exercise, so I wake up early in the morning and run/jog/walk for a few miles. The first time I did this, I was amazed at how empty the city seemed. The only people around were the ones cleaning the stores and restaurants on Emek Refaim, or a few other joggers and dog-walkers. I got to the end of my route and realized the infamous windmill was just another block or so, and there was a beautiful view from the promenade next to it. I got to the top as the sun was just rising above the Judean hills surrounding Jerusalem. The color of the sunrise itself was beautiful, but the way the sun reflected off of the Jerusalem stone was absolutely breathtaking. I snapped a photo of the sunrise and the windmill. It was really incredible, and I personally believe a Jerusalem sunrise is something everyone should experience at least once in their lifetime. 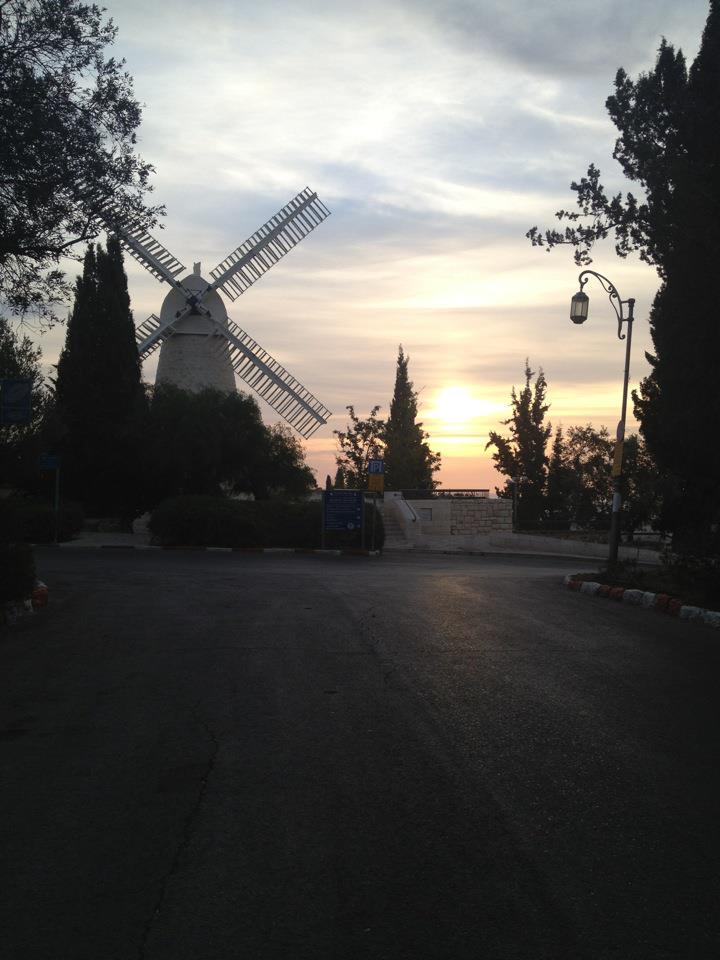 On my way back home, I was thinking how nice it was to be able to jog and not yell “slicha” (excuse me) at the hoardes of slow-moving, fast-talking Israelis, and how grateful I was to be able to appreciate the beauty of Jerusalem at my own pace. Then as I reflected more, I wondered what it is that makes Jerusalem so beautiful and special. Is Jerusalem inherently beautiful on its own with the Jerusalem stone, the pomegranate, olive, and fig trees, the hills and the sunrises/sunsets? Or is it the people that make up this crazy, frustrating, insane, illogical, yet somehow magical city, that makes it something amazing?

I think it’s the people. True, they have no concept of waiting in a line or opening a bank at normal hours. But when you say “Shabbat Shalom” to the owner of the makolet (mini-grocery store) and he says “AMEN AMEN u’l’kol am yisrael” (and to all the people of Israel) with a giant grin on his face, as he looks up from the page of Talmud he studies when he has no customers, its hard to see this city, and the people in it, as anything but beautiful. I am so incredibly thankful to be here and having all of these wonderful experiences.

Another brief “Beautiful Jerusalem” experience: on Friday, one of my classes took a walking tour around parts of Jerusalem, and while we were stopped in a courtyard, an elderly man (at least 95!) came up to us and said he would open the Museum of Psalms especially for us for 5 minutes so we could look around. It turns out the man was a Holocaust survivor from Hungary who began painting upon arrival to Israel. He does incredible, vivid paintings of the various Psalms from the Bible – they are really truly amazing to see.

On a final note, since it is Movember (men grow moustaches, raise awareness and funds to fight cancer affecting men), I’m helping to raise money in honor of all the amazing men in my life. If you’d like to donate or learn more, click HERE 🙂