Posted on November 18, 2012 by Lauren Schuchart

“You’re worried? You don’t need to be worried. The rockets can’t reach Jerusalem,” they said.
“You don’t feel safe in Tel-Aviv? Come stay with us for Shabbat,” we said.
“No, Mom, I’m fine. Jerusalem is out of the range of the rockets. Don’t worry,” I said. 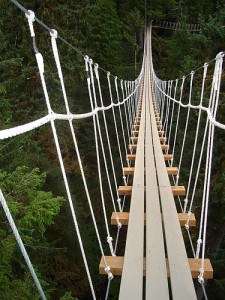 “The whole world is a very narrow bridge. And the most important thing is to not be afraid.”
-Rabbi Nachman of Breslov

Yesterday was Friday. I spent the day doing my usual “Friday things”: shopping, cooking, cleaning, coffee with a friend. Even though there is a heaviness in the country, with southern Israel and now Tel Aviv under rocket attack and many soldiers being mobilized near Gaza, LIFE in Israel goes on as usual.

As Shabbat was approaching, I was running around like any other week. I quickly finished cooking my dish for dinner, threw the dirty dishes in the sink (and promised my roommates I would do them later), took a 5 minute power-shower, threw on some clothes and make-up, and lit the candles. With all the events of the past week, I was eager for some Shabbat rest, while being fully aware that this was a luxury, as other parts of this country and region would be having no rest at all.

We arrived at shul (services) right before the beginning of the main prayer service. Just then, we heard it: the air raid siren, indicating that a rocket has been launched near the area, and we should get to a stairwell or shelter as soon as possible (in Jerusalem, you have about a minute).

Everyone calmly left the room and went into the stairwell. We waited for a few minutes, and then returned to the service.

I was pretty shaken up. After all, I had been told many times that the rockets couldn’t reach here. And we really had no information about what happened and where it landed, because no one had their cell phones. As we started praying, I looked around the room and saw the intensity and fervor with which people were praying. It was as if people were taking their pain, anger, anxiety, and turning it into passionate prayer. I was so moved that tears rolled down my face the entire service. I wasn’t scared, but just felt incredibly sad. I kept asking myself, “why is this happening?”

After services, I went to dinner with friends. Everyone was a little freaked out, but happy to be in each other’s company. Today, it seemed as if life is going on as usual; kids playing outside, people going out for a run. Israelis do not allow their lives to be dictated by fear, and so, neither will I.

My experience last night was just a small taste of what Israelis in the south are going through right now, under the constant threat of rockets. Close to 70,000 soldiers from the reserves are being called in to serve, a few of my friends and people that I care for deeply included in that number. This is the harsh reality of living in Israel.

I’m deeply grateful for the soldiers who are fighting to defend this country. I regret that this is the way it is right now, as there are innocent people suffering on all sides. There are no winners here.

I appreciate all of the concern from friends and family. Thank God, I feel safe and supported by a wonderful community. I am directing my prayers and thoughts to those in the south, to our brave soldiers, to the people on both sides living in fear, to all those who seek true peace.

May this all end soon.