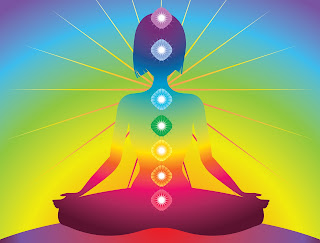 It appears that I may have two souls.

My first soul isn’t sure how it feels about this. Previously, it was always the center of attention, benefiting from activities that are “good for the soul” – like yoga, baking and writing (note that I said soul, not souls). Now, however, it appears that the love might have to be shared – or maybe it has been shared all along.

I learned this soul concept whilst in a class entitled “Relationships” at Pardes. The first relationship we are covering is the relationship between us, and, well, ourselves. After we discussed the division of soul into animal and pure, we discovered that the pure soul has five “voices”:  Body & Actions, Speech & Feelings, Thoughts, Collective, and Universal. Some of these parts also have corresponding forces in the animal soul, creating tensions between our perceived desires and our true needs; our long-term goals and our impulsivities.

I have heard this concept described before, but never in the terms of soul. Romantics call it “head versus heart”; psychologists call it “cognitive dissonance.” Opposing desires either reside in different organs or are produced because we desire one thing and do another. We can understand the brain and we can sometimes understand emotion (stimuli + hormones + neurons) – but we cannot understand the word “soul.”

Does a soul feel? Think? Magentize? According to my teacher, the role of the soul is to guide us through life, and I like this interpretation. I think that the soul guides our inner musings and our outer behaviors; we can think of it as the instinct that pulls us toward certain feelings, thoughts, and actions.

Let us examine two of the voices of the soul to explain what I mean by “instinct.” The Collective voice (חיה), refers to the part of our soul that connects with nationality, religion, family – any group with a strong identity. For example, when reading A Room of One’s Own, by Virginia Woolf, a certain woman might feel kinship with her fellow female writers of the world. On a smaller scale, when that same certain woman finds herself in a room full of Bilmeses (whether playing Scrabble, talking about young-adult fiction, or singing showtunes off-key), she feels a warmth and a comfort that only comes when the Bilmes part of her soul is evoked.

The Universal voice (יחידה), on the other hand, connects not with people but with the natural world. It acts as the alarm clock that wakes me just as the sky is turning pink, and weaves the string that tilts my head back just as the stars define themselves in the night sky. The Universal voice is in tune with nature, making us appreciate the rhythms of the world and wonders of the air, big and small.

For those of you who know me well, you know that I rarely do anything without planning it first. But for the past few weeks, I’d had the idea in my head that I need to go to the shuk, I need to go to the shuk and then yesterday I had time so I went. I hopped on a bus and knew which stop to get off after, then figured I’d just follow the masses. Knowing the names of some key streets helped. And it turns out that after I got off the bus, all I needed to do was follow the train tracks, which would lead to an alley on my left which I would turn into and get hit with people, colors, smells, yells, and a dizzying array of olives (I didn’t actually get hit with the olives, just with the realization that there were so many of them).

I wandered through the market with my eyes wide open and a silly sort of smile on my face – a smile that connected me with this crazy culture and the overwhelming sound of Jews buying food for Shabbat. As soon as I opened my mouth, the vendors knew I was American, but I defended my nationality by speaking in Hebrew. I even had to tell one of them that I wasn’t stupid (in Hebrew) when I asked for half a kilogram of raisins and he tried to sell me three. I resisted the urge to take pictures (the one above is courtesy of the internet) because I could not bear having the word “tourist” plastered on my forehead and also because it is impossible to be un-jostled long enough to take a picture.

After leaving the market, I continued my adventure by finding the gluten-free store and purchasing the ultimate non-wheat triumph: gluten-free pita. I also found cocoa powder, almond flour, and chocolate rugelach.

I was finally tired and my bag was getting heavy, so I wandered back through the shuk, found a watch-repairman from whom I purchased a new battery, and made it to a yellow-marked bus stop (but not before stopping in a store called Bandana (בנדנה) and purchasing a 100% cashmere scarf for 30 NIS).

So why do I say that is adventure was induced by my soul? Well, for one thing, I felt the need to go. I love my time at Pardes, but with a free afternoon, I could not bear to sit inside one moment longer. I remembered back to a few weeks ago when I walked the streets of Jerusalem after ulpan; I remembered the excitement of exploring on my own – or, rather, my soul reminded me of it. And as I returned from the shuk after dark, with the brights lights of Jerusalem illuminating the beginning of the Israeli weekend, I felt a simple happiness from being in the right place and mindful of my soul.

One of my roommates had already called the landlord, who said he would be over tomorrow; another one of my roommates was baking brownies (which can be done largely without water, so I joined her).  The full frustration didn’t hit until this morning, however, when there was still no water, and I realized (after using the toilet) that pouring water into it does not help it flush. For a person with IBS, having no working toilet is enough to produce an anxiety attack, which can in turn can, unfortunately, provoke an IBS attack. And a really bad mood. 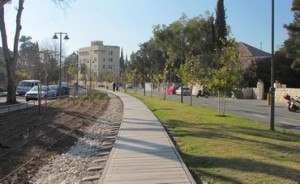 The old rail road track, which is now adjacent
to a paved walking / running / biking path

My roommates had all gone off on various jaunts, and I felt quite abandoned as the sole survivor of the drought. To ward off further negative thoughts, I went jogging. This was actually kind of a big deal for me, because I hadn’t done it in about two years…so I started off slow. Two minute jog, two minute walk, two minute jog, two minute walk, until I decided to run for longer bits. I stopped at a park, stretched, wondered why a crow was ten inches away from me, then made my way back and stretched some more. Then I called my friends to ask if I could use their shower.

A few hours ago, the landlord came by and figured out the water problem. I have never been so happy to flush a toilet in my life.

And thus ends my first full week as a Pardes student: I am up one soul, down for adventure, and ready for a day of rest.