Posted on February 5, 2013 by The Director of Digital Media 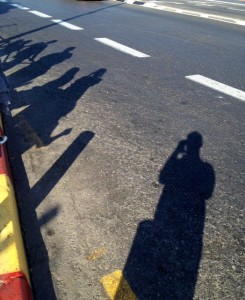 Lining up at the trempiada in Gilo.

Whichever name you ascribe to it, or how you pronounce it, catching a ride with a total stranger remains one of my favorite aspects of living in Israel. Likely born out of a larger sense of family and the practical reality that not every person owns a motor vehicle, accepting a ride with a stranger is part of the traveling culture in this country. Despite the fact that hitchhiking is not governed by any written rules, there are some unspoken understandings by which both drivers and riders adhere, most of the time. Remember, this is Israel, rules are flexible and subject to personal interpretation as the situation dictates. The following are some Do’s and Dont’s as well as humorous moments.

Use the finger. No, not THAT finger!

Instead of the well known thumb, hitchhikers in Israel use one finger out from the body pointing at the road to indicate that they are soliciting drivers for a ride. Sometimes they will indicate a direction in which they are traveling, hoping to find a driver who will oblige.

Stand at a junction outside of a city.

Although you might get lucky, generally tremping within a city is not done. However, at the junctions or main roads exiting a city, there are often areas called trempiadas where people wait for rides.

Remember, the driver is doing you a favor. Get your bag, your self, and get in. You do not want to delay your generous driver, especially since you are now riding in their car and are subject to any rebuke they might feel necessary to deliver. The slower you move, the more likely it is that somebody will jump the “line” and get in before you, more on that later.

Once you have agreed on a destination or drop off point, it is not appropriate to change. Often you will be accommodated as long as the driver is not going out of the way, but being a flip-flopping will not win you any friends on the open roads.

Lines are a mere suggestion in Israel. However, if you are in a situation where multiple people are going to the same destination, generally the policy is first come, first in. Some will try and breech this rule and jump in before you, do not let them, move quickly, get in, and then make a face or dismissive hand gesture when you drive away

Smell, Cut your nails, Talk, or make your presence known.

You should be as unintrusive as possible. If you stink, I do not want to ride with you. If you must cut your toe or finger nails, do it at home, or while you wait for the next guy to pick you up, gross. Talk when spoken to, otherwise be quiet. Nobody likes a smelly talkative tremper who decides that it is time for a manicure or pedicure.