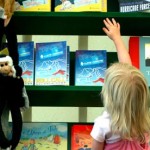 I need a man, not a monkey.

I am usually a very tolerant person, especially when people are trying to understand human diversity. I will kindly explain that, no, Connecticut is not New York and that, yes, I would rather watch reruns of “Gilmore Girls” than new episodes of “Jersey Shore.” I will gladly explain that I would much rather bake with a guy than go to a bar with him, and I’ll even accept his offers to get things for me from high shelves.

But this weekend, I reached a limit. There comes a point when I can no longer make jokes about all the things I should make jokes about.
The scene: Friday night dinner with a few Pardes students and a wealthy British family.
The subject: Being gluten-free.

It all started off innocuously enough. My hostess called me during the week to say she would be investing in a gluten-free challah, and not to worry because there would be fresh fruit for dessert (misconception #1: gluten-free people do not always want to eat fruit. Imagine that everyone around you is eating chewy, fudgy brownies. You sink your teeth into a firm, green pear. See how that feels? Healthy – yes. Satisfying – no.)

At the meal itself, statements exalting the glory of the gluten-free challah simply rained from everyone’s mouth – but no one would deign to try it. “Oh, that’s the gluten-challah,” they would say. “How intriguing! Pass me the normal one.”

Throughout the meal, I was told what I could and could not eat (I had no idea that matzah balls were off limits!), and everyone took pride in telling me that being gluten-free is so common these days aren’t all the products out there just amazing?

In an effort to be a good guest, I had baked a dessert and brought it with me. When I presented it to the host, he announced, “Oh look, Naomi brought her own dessert!” I quickly piped in with, “No, no, there’s enough for everyone!” Despite my attempt at inclusiveness, when dessert rolled around and I placed my gluten-free coffee cake on the table, my host winked at me and said, “We won’t be eating that now, will we?” 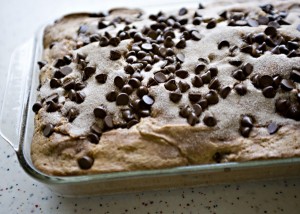 Before you all jump down my throat about being overly sensitive, please try to understand where I am coming from. I really appreciate your curiosity and flexibility when it comes to dietary needs. But as with any issue, the constant reminders can eventually chafe – especially when the issue is so strongly associated with physical pain and emotional challenge.

I started eating gluten-free one year ago. I had had tests for Krohn’s disease, ulcers, inflammatory bowel disease, colitis, celiac disease, and intestinal bacterial overgrowth. I was diagnosed with none of the above.

Nonetheless, thanks to Kate Scarlata’s FODMAP theory and the aid of a dedicated nutritionist, I decided that cutting out certain foods might help my intestines – and gluten was one of those foods. After six weeks of eating no gluten, I conducted a gluten-trial: eating a bowl of Great Grains and Grape Nuts for breakfast. Three hours later, I knew gluten needed to be banished from my diet.

So gluten is gone, but many of the problems still persist, which is why I don’t really like telling people that I am gluten-free. Whenever I tell someone I don’t eat gluten, they assume that gluten is the only problem and now I feel all better. So not true. Gluten is about 1/8 of the problem and I still have pain most of the time. I constantly feel it, hide it, and work through it. It affects my sleep, my eating, my concentration, and my social life. Believe me, I wish rice flour could solve all these problems – but it can’t. 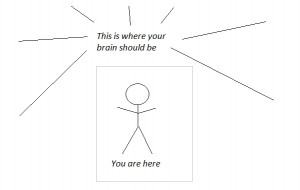 So what do I ask of you? Simply to think a little bit outside of your box. Not everyone who is gluten-free is a diagnosed celiac. This doesn’t make his or her problem any less real. What is real, however, are that person’s emotions, so please consider them.

But now, I will lighten the mood a bit. For Purim, the only British girl at Pardes wrote a hilarious speech about all the dumb questions people ask her about England. In that same vein, here are actual things people have said to me about being gluten-free. Below each statement or question is the way I would like to respond. Below that is what actually comes out of my mouth. Enjoy.

Person who likes to make generalizations: “So you’re a celiac.”
What I would like to say: Stop making generalizations.
What I actually say: “Nope, I’m just sensitive to gluten. Lots of things make my stomach hurt, and gluten is just one of them.” 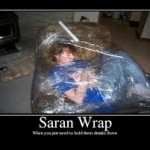 Concerned Jew: “Oops. I made you a Mishloach Manot but I didn’t put any celiacs inside.”
What I would like to say: Thank goodness! I hate it when people kidnap gluten-intolerant people and tie them up in holiday-related packages.
What I actually say: “That’s fine. It’s the thought that counts.”

Person who is generous yet forgetful: “Do you want a piece of my (gluten-laden) muffin?”
What I would like to say: Remember all those conversations we had about my gluten-intolerance and your nut-allergy? Do you see me offering you a Reese’s?
What I actually say: “No, thank you.”

Person who always wants to know what everyone else is eating: “That’s gluten-free? What’s in it?”
What I would like to say: Do you really want me to list all 27 ingredients?
What I actually say: “Sugar.”

Pessimist: “What can you eat?”
What I would like to say: Plenty. And it’s probably a whole lot more natural than what you eat.
What I actually say: “Fruits, veggies, quinoa, buckwheat, chicken, fish, potatoes, corn and rice products, eggs, nuts…” 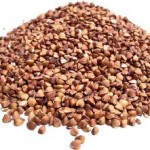 No wheat in buckwheat!

Alert skeptic: “Wait, isn’t there wheat in buckwheat?”
What I would like to say: Ok, I’ll admit that one is tricky.
What I actually say: “No, buckwheat is actually wheat-free.”

Dunce: “Does pasta have gluten in it?”
What I would like to say: Seriously?
What I actually say: “Not if it’s rice, corn, or quinoa pasta.”

Person who feels guilty that the whole eating this is easier for him than it is for me: “Passover must be so easy for you, right?”
What I would like to say: Right. Because corn, soy, and legumes have suddenly become kosher for Passover for gluten-free people.
What I actually say: “Right.” 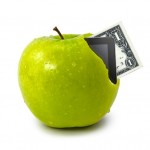 Sweet! Money AND an iPhone!

Person intent on feeding me: “Do you want an apple?”
What I would like to say: Only if it has $100 inside.
What I actually say: “No, thank you.”

Person who tries to sympathize with everyone: “Did you know that my (insert name of family member or friend here) is also gluten free?”
What I would like to say: No. And I don’t care. Unless that means that you have a surplus of rice cakes and would like to give me some.
What I actually say: “Oh, really? How quaint.”

Celiaphobic person: “I would die if I couldn’t eat gluten!”
What I would like to say: That might be for the better.
What I actually say: “Oh, no, I’m sure you could handle it!”

Insensitive clod: “These cookies are only for glutards.”
What I would like to say: That word is NOT funny. Everyone agrees that “retard” is not okay, so why would “glutard” be okay??
What I actually say: “Thanks for the cookies.”

Note that the last example does not have a sample of what I actually say. This is because I have yet to think of a constructive reply to this statement and, in response, I usually just fake a smile and seethe inwardly.

If you see a question on the above list that you might have asked, don’t despair – it happens to the best of us. You can be at peace knowing that your provided me (and hopefully some of my readers) with a good laugh.